IPL 2018 Score KKR vs RCB: This is the first game for both of these to sides in the IPL 2018 campaign. This time, KKR will arrive with their new captain who was the reason behind the final winning match against Sri Lanka recently, it’s DK – Dinesh Karthick. Early, this team was carried by the experienced IPL captain Gautam Gambhir and they played at playoffs in last season.

The second and night match of the second day of this IPL 11 will be scheduled for Kolkata Knight Riders and Royal Challengers Bangalore. The match will begin on 8 PM local time (2:30 PM GMT). This is KKR’s home match, so the venue will be at Eden Gardens in Kolkata. The two-time champions will meet one of the powerful sides who keens to win this IPL 2018 final as they have not won any yet.

In the IPL 2017, Royal Challengers Bangalore gave their ever worst performance. They won just three games in 14 with a match no results. They spotted at the bottom of the points table in the league stage. While Kolkata Knight Riders entered into playoffs and third won a place of the season.

KKR Winning Chance: Owners retained Andre Russell and Sunil Narine. All other players of the team are new to the team and also they have less number of players than other IPL teams. One of the major players of KKR has ruled out from the opening game, Mitchell Starc due to a stress fracture. Though, Tom Curran is there as a replacement. Also, the team had another minus that Chris Lynn had an injury on his shoulder when playing for Australia recently. He was in the practice session, so he will be there as one in playing XI. It is tough, but there will be a chance for KKR to win.

Update: Kolkata Knight Riders have won the toss and have opted to field (Bowl)

The toss-winning captain opted to chase in each of the seven IPL matches in last season at this venue.

RCB winning Chance: Owners are RCB bought their important players back in the auction. Virat Kohli, AB de Villiers, Sarfaraz Khan, and Yuzvendra Chahal are those players. The team looks stronger than ever before with the added bonus of Quinton de Kock, Corey Anderson, Colin de Grandhomme, Mandeep Singh and Manan Vohra. Also, they have sensational young player Washington Sundar, who rocked in his recent matches. So, RCB fans can believe on this squad to win this match. 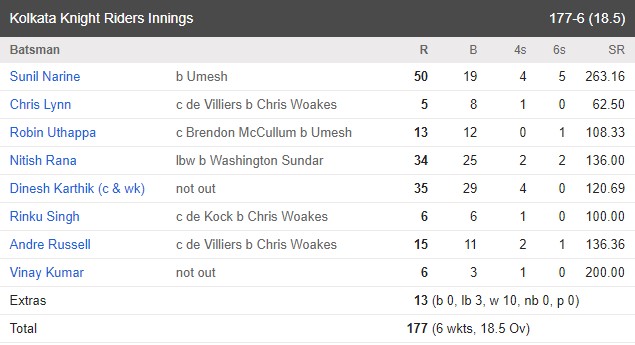 Based on your prediction, you can select a team here and also share your KKR vs RCB prediction in the comment box below:

KKR vs RCB match result will also be available here!

KKR next Match: They will play their second IPL 2018 over Chennai Super Kings on April 10, Tuesday at 08:00 pm IST at Chennai (away game).

RCB next Match: Virat Kohli and company will play their next game at their home ground with Kings X Punjab on April 13, Friday at 08:00 pm IST (home game).