The Diwali release movie Dhanush “Kodi” audio track list has been released today on October 4 along with the Kodi Audio songs release date. The Dhanush fans can hear the songs from Tomorrow onwards. The Official twitter of Dhanush pinned his recent updated Kodi Album track list. All Five songs of Santhosh Narayan’s has released by the Sony Music South VEVO on Youtube. Watch and Listen the Kodi Audio Songs in the format of Lyrics Video here below. 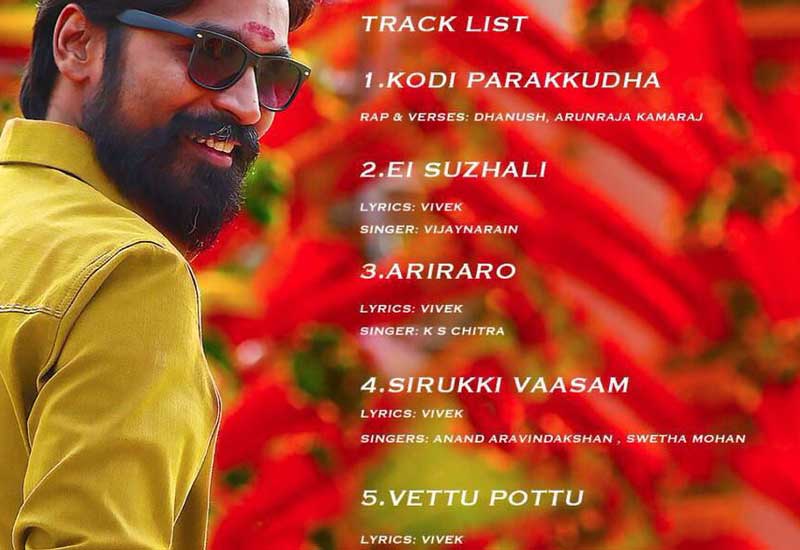 The Actor Dhanush acted in the dual role for the first time in his cinema career, and the film will ready to hit the theaters as soon in Diwali festival. As per the recent announcement, the Movie Audio launch will be held tomorrow on October 5. It is the first film for Dhanush combined with Santhosh Narayanan. The above picture shows the complete track list for the movie. Scroll down and get the Kodi Audio Songs Lyrics Video.

The Kollywood actor became a producer on a few years back and now, he geared one more step up as a director of the film. Recently, his brother Selvaragavan appreciated about his story of Power Paandi. He expressed along with few words about the movie as funny, magical and touchy. Dhanush as well replied fro this tweet as “It’s all because of you Brother.”

The Audio may hit the internet on this midnight and the official CDs will available on stores from tomorrow 12 PM. Sony Music South had the audio rights of the film. The Following artists are there for the reason of this Five tracks. Chitra, Arunraja Kamaraj, Dhanush, Shwetha Mohan and Shankar Mahadevan are the signers of this film.

Lyristis Vivek has penned all the four songs for this film. The Title track and the introduction song of the film “Kodi Parakutha” has sung by Dhanush and Arunraj Kamaraj. The Kodi Motion poster was released recently on September 28, and it got the massive response across the audience.

Listen to Kodi Audio Songs Lyrics Video Playlist. Subscribe our Channel to get Up to date Tamil Movie Songs in Playlist

Here is the table of the Kodi Songs Track List:

The recent release of Thoodari got positive reviews among the Critics. But, it fails to get the positive approach over the public. The film bagged the average box office collection.