GL (Raina) won the TOSS and Chose to BOWL First

Get the Full ScoreCard of this Match Here 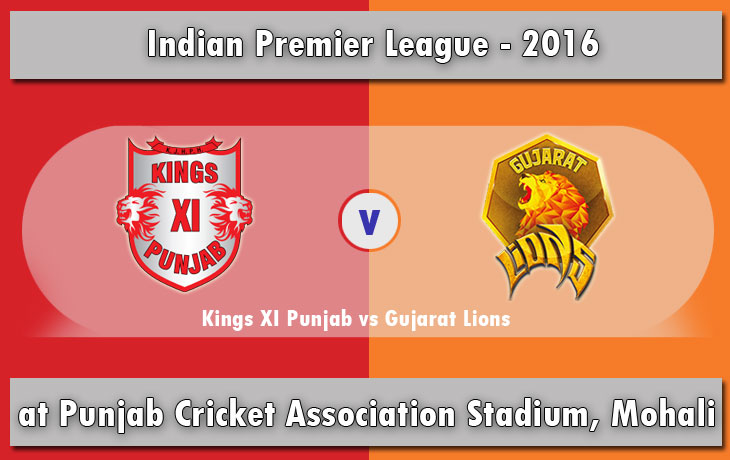 The new franchise team, Gujarat Lions will be going to face the opponent, Kings XI Punjab. The team, KXIP replaced their skipper as David Miller in the Australian George Bailey’s place. The Senior player of the Indian team, Virender Sehwag takes the role as advisor for Kings XI Punjab. Scroll down to get full details about the details of the match.

The team, KXIP didn’t bring the new big player in this ninth edition of IPL 2016. Other than the team has all-rounders Farhaan Behardien and Marcus Stoinis. The team has a top order batsman such as Miller, Maxwell, Shaun Marsh, Murali Vijay and Mitchell Johnson. The seamer Mohit Sharma and left-arm spinner Swapnil Singh is one of the main key players of XI Punjab’s bowling side.

One of the well batting lineup team will be going face the opponents with a plenty of top batsmen such as Brendon McCullum, Suresh Raina, Aaron Finch and all-rounders in Dwayne Bravo, Ravindra Jadeja, and James Faulkner. However, the team consist of only one famous name for pace bowling; he is none another South African Dale Steyn. From this names itself, we will get the team as a top balanced group on both batting and bowling. Even though the team’s final XI had lots of mashups due to the pace bowling. On recent matches, Steyn also performed as poor.

Football before Cricket. That's how our Lions get in the groove. Pre-match preparations! #LionsDen #GameMaariChhe pic.twitter.com/6gy366zdZ5