Kings XI Punjab vs Gujarat Lions KXIP vs GL Highlights: The Third Match of IPL’s ninth edition was played on April 11th, 2016. The match was started with KXIP’s batting, whereas Suresh Raina calls head while Toss and he got that, so he elected field First. Scroll down to view the Full Scorecard of KXIP vs GL. 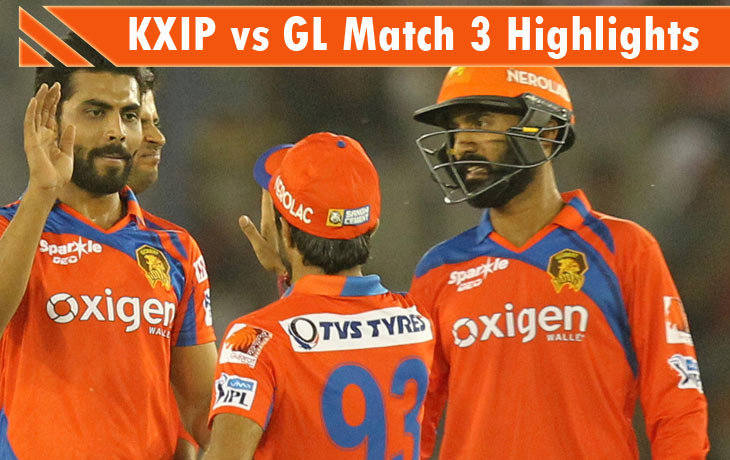 As per the toss, Kings XI Punjab’s opening players Murali Vijay and Manan Vohra started the game with the perfect score as 42 and 38 run with the strike rates of 123.52 and 165.21. Murali Vijay falls on Jadeja‘s ball on tenth over of the innings as a the ball hits the middle stump, at that time, the team score was 91 for 2 wickets. However, Miller and Maxwell both of the player was returned to the pavilion on Bravo‘s ball with the score of 15 and 2 runs. Wriddhiman Saha and Marcus Stoinis also take their walk toward their seat by Bravo 19th over. But the middle order batsmen performed well for their team’s total score as 161.

Apart from Bravo and Jadeja, Praveen Kumar and James Faulkner also shared their overs in this innings without picked any wickets. The Captain Suresh Raina gave two overs each for Pradeep Sangwan and Sarabjit Ladda. They gave 21 runs each with the same economy rate as 10.50.

Here, in this second innings was also started with the Big scorer, Aaron Finch. He played well with the 12 fours and reached 74 runs off 47 balls. On the other hand, Brendon McCullum stumped by the Wicketkeeper of Kings XI on the first over by Sandeep Sharma. The team skipper, Raina scored 20 runs with Two massive sixes. He was caught by the Johnson on the fifth over by Stoinis. Ishan Kishan and Jadeja, both are out with the small scores as 11 and 8. After Finch, Dinesh Karthik takes over the important position of the match and scored 41 runs off 26 balls with 7 fours. Finally, Bravo joins with Karthik and wins the match by 5 wickets with last Four of Karthik.

Stay tuned for updates about the ninth season of IPL 2016.