Kings XI Punjab vs Kolkata Knight Riders, KXIP vs KKR Live Score Updates: The 13th Match of IPL 2016 will be held at Punjab Cricket Association Stadium, Mohali on 08:00 PM for KXIP vs KKR. Scroll down to get Full ScoreCard and Highlights of the match.

Kolkata Knight Riders Won the Toss and Chose to Field

Get the KXIP vs KKR Match 13 Score Card and Highlights here. 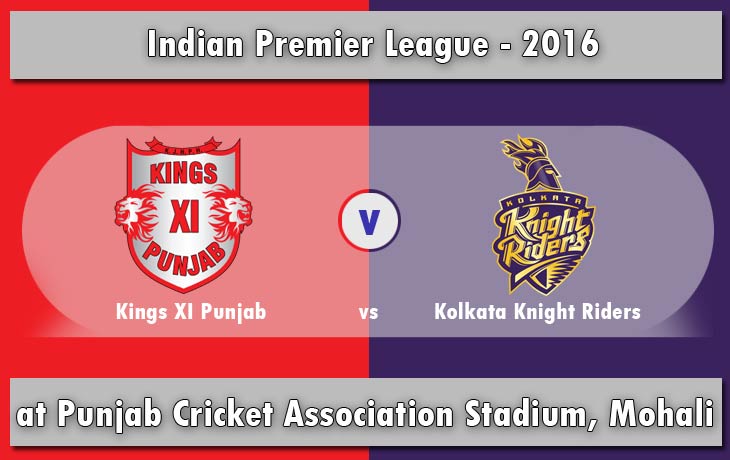 The Kings XI Punjab is here to play their Fourth Match after losing their first two matches and wins against with MS Dhoni’s Rising Pune Supergiants.

However, the team won their last match with the hits of Young player Manan Vohra and Glenn Maxwell’s Big shots. The Opening batsman of this team, Murali Vijay scored 96 runs in last three matches as 42, 1 and 53.

By winning today’s match, the team will be going to the top of the points table. The team skipper Gautam Gambhir scored 192 Runs in Last three Matches as 38*, 64 and 90*. The bowlers also, as we all knew about the powerful compact between John Hastings, and Brad Hogg.

Sunil Narine is there to maintain and break the runs of opponents team. He may carry the overs of 9, 11, 13 and 15. We need to wait for the plan of Gambhir.

Already the man bowled for the team Sunrisers Hyderabad without taking any wickets but he is the least one of the economic rate as 6.50 by giving just 26 runs.