Kings XI Punjab vs Mumbai Indians, KXIP vs MI Live Score Updates: David miller’s KXIP will be going to face the Sachin’s MI at Punjab Cricket Association Stadium, Mohali on Today Night (Monday) 08:00 PM IST. Scroll down to get Full ScoreCard and Highlights of the KXIP vs MI match.

Score Card of this 21th Match KXIP vs MI here 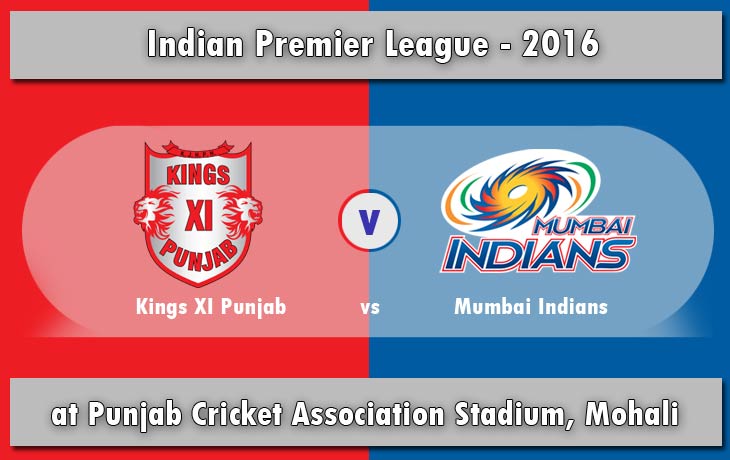 KXIP team remain stands at the Last on the IPL 2016 Points Table with the just one win out off Five matches. The Opponent team, Mumbai Indians stands on the points table just above of the Rising Pune Supergiants at Sixth position with the wins of Two off Six Matches. Today’s Match will be a Seventh for MI and Sixth for KXIP.

On the last three matches, KXIP has batted First with the scores of 111-9, 138-8 and 143-6. Also the David Miller’s team batting line-up was collapsed without marked any mile stones and the team managements also one of the biggest issue here.

Davis Miller and Glenn Maxwell are also failed to score a Big runs as of now. One of Young Batsman, Manan Vohra played on their batting innings as a middile line-up and made the series of score with little majority with the runs of 38, 32, 51, 8 and 25. Also, another one batsman was there at the lower order, Shaun Marsh; he scored 56* and 40 in his last two Matches.

Rohit Sharma’s Mumbai Indians have played their Match today as a sixth one, whereas MI only the team have played more matches than the others. The team was deafeted on their last match against with Zaheer Khan’s Delhi Daredevils. The opers of the team, the skipper Rohit Sharma and Ambati Rayudu played all their Mathes as Well. But the other middile and lower battings are struggling with their performance.

Such as Parthiv Patel, Hardik Pandya are all didn’t play their ,atches as good and forgot to play well. Also, the foregin Players Jos Buttler and Kieron Pollard have played well on only once so far this IPL 2016.