Kings XI Punjab vs Rising Pune Supergiants, KXIP vs RPS Live Score Updates: The IPL 2016 Tenth Match will be held at the location of Punjab Cricket Association Stadium, Mohali on 04:00 PM IST for KXIP vs RPS.  Scroll down to get Full ScoreCard and Highlights of the match. 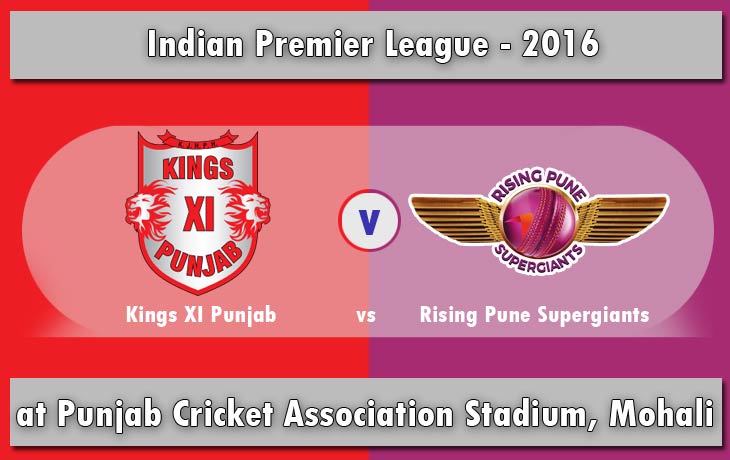 Here, the IPL 2016 first week matches are completed already and their second schedule were also begins and going on. In that, the 10th match of the ninth edition of Indian Premier League was started with the game of Kings XI Punjab versus Rising Pune Supergiants.

We can’t accept the play from the 2014 IPL legend, who scored 552 runs in that tournament, he was dropped quickly on last two consecutive matches, he is Glenn Maxwell. Also the Miller didn’t performed well and failed to make happy faces on their fans.

The Chennai Super Kings player, Murali Vijay has a player of Test Cricket. He is present in this Punjab team as currently. The team need to grow more on this IPL 2016 to show their power with the original batting of Miller and Maxwell. Their sudden drops are make the fear on following batsmen and also their fans.

We Know about the scenario of the difference between CSK and RPS team combinations. The India team Captain and wicketkeeper Mahendra Singh Dhoni already said about the present team situation as given below.

On the press conference, after the loss against with the Rains’s Lions, MS Dhoni said “We need to look at the team composition.”

One of opening bowler of the Rising Pune Supergiants is RP Singh. He is most trusted bowler for Dhoni’s team in period of 2007 – 2008. Perhaps, the left arm seamer lost their old qualification as present games.

In the past few matches, the skipper didn’t give the full quota for Ravichandran Ashwin because of his bowling changes. However, his new state-mate Murugan Ashwin shows his decent actions on the recent seasons.

How to Download the Audio File from Streaming Video