Due to the death of Telugu film legend Dasari Narayana Rao, it reportedly SPYder Teaser Release postponed on another date. However, the maker supposed to be released the teaser on Wednesday (May 31), today.

Some of the sources and rumors spreading that the teaser release of SPYder has been delayed as to respect the legendary director Dasari Narayana Rao. He died at his age 75, who celebrated the birthday recently on May 4. Due to prolonged illness, he died on Tuesday evening, 30th May 2017.

The director of SPYder, AR Murugadoss retweeted the post which mentioned that “As a mark of respect to the legendary filmmaker Sri Dasari Narayana Rao Garu dismissal. SPYder teaser will be released on 1st June.” Teaser expected on Morning 10:30 AM. Also, AR Murugadoss and Mahesh Babu have expressed their condolence messages on Twitter over the death of Dasari Narayana Rao. “Deeply distressed to learn about the passing away of one of the Greatest Stalwarts of Indian Film Industry” the director tweeted.

The Actor tweeted that “Shocked and saddened by the news of Dasari Narayana Rao Garu’s passing away. May his soul rest in peace. His death leaves a void that can never be filled. Prayers and strength with the whole family.” 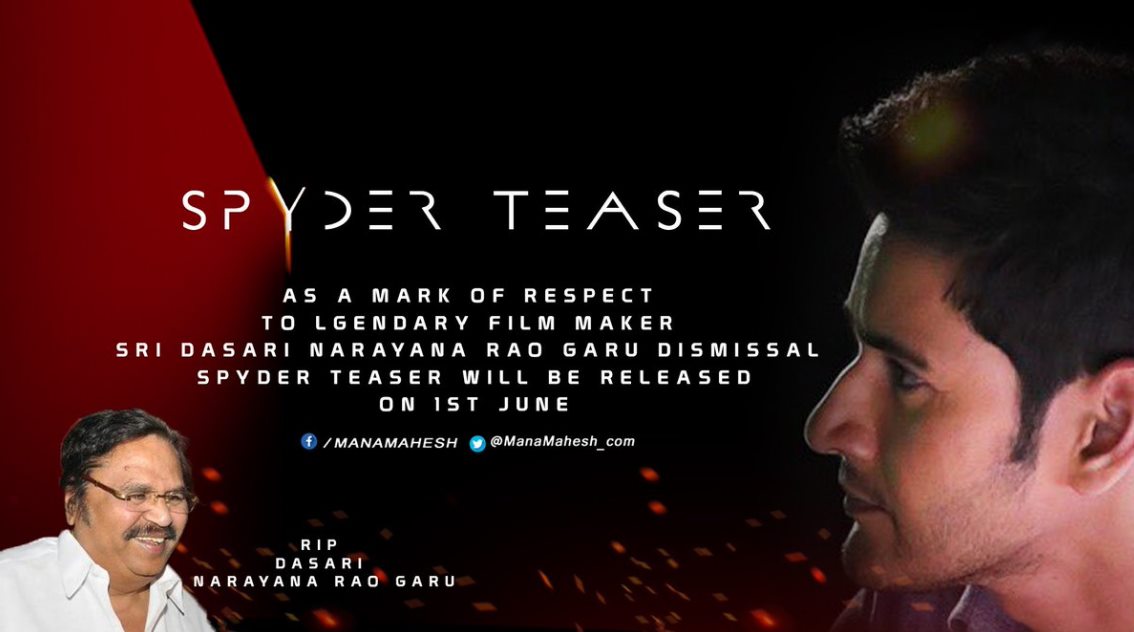 Due to the dismissal of Dasari garu, the makers decided to be postponed the teaser release on July 1st, Thursday. However, the fans of Mahesh Badu disappointed because of the current status. The Mahesh Babu fans have curiously looked forward to the release of SPYder teaser.

Harris Jayaraj’s musical film has cinematographed by Santosh Sivan and finalized by the editing of A Sreekar. SPYder is the Tamil and Telugu bilingual film. While SJ Surya is the antagonist of this Spy film. The lead actor Mahesh Babu will appear on the screen as a secret agent. Rakul Preet Singh is the lead female actor of this film.

AR Murugadoss signed up VFX supervisor Kamal Kannan, who has earlier worked on projects like Eega and Magadheera. It is for the climax surprise by the maker. The film post-production works going on along with the final shooting. Makers planned to release the SPYder on September.