Master Movie Review, Rating: Actor Vijay’s Master has released worldwide on 13th January, Wednesday. The movie has been released a day before the important festival among Tamil speaking people around the world, it’s Pongal. Even in this pandemic situation, the government and the people also want to return to their normal life.

Especially, the industry of cinema across the world is one among other industries which suffered a lot. However, there is a new alternative way to release new movies on digital platforms, few big stars movies were made to release on theaters only.

Now, Master has captured almost all the theaters in the state of Tamil Nadu and all over the world. In other words, actor Vijay awaits to answer the big questions such as “Is will the Vijay film bring back people to theatres? and Is he bring money back to theatres?” In between this, the Tamil Nadu government revised the order and asked the theatres to operate with 50 per cent occupancy only.

Even with 50 per cent occupancy, Master had a great opening. Film critics and analysts said the Master’s collection should not be compared to previous films of actor Vijay or with other films as the circumstances are different.

‘Vijay The Master’ Hindi-version will release on 14th January around 2000 screens in the Northern states of India. It’s because there is no other big Bollywood or Hollywood releases on this date.

Master movie has dubbed into three other languages such as Telugu, Kannada, and Hindi. The fans and people are confused because there is a movie called ‘The Master’ which was released in 2012. So, some of them searching such as ‘Master Tamil movie review, Master Movie 2021 review.

The lead male actor is an alcoholic, also who is a professor. How he comes to juvenile school and playing against the gangsters who use children for criminal activities. The story is all about How he faces the situation and who are they?

The movie has already been released in Australia and the United Arab countries. The fans and people were sharing their thoughts about the movie on their social media handles.
Master Day is here now!!

Mouli: Thalapathy Master is a Modern Commercial MASTERPIECE. Lokesh’s vision is unbelievable. Vijay’s attitude is outstanding and VJS is the DEADLIEST Villain in recent time. Anirudh proves again that he is the King. Story & Screenplay THERI. BLOCKBUSTER movie.

Ram: #Master review: A modern commercial Masterpiece that will pave the way to more grounded and story-focused films with relevant themes. Vijay shines every scene with absolute killer body language. Intentionally Mellow screenplay which takes its time to settle but once it does there is no stopping the momentum. Sethupathi is brilliant as usual, a sinister antagonist. Watch out for Andrea! Malvika does a magnificent job but the screen stealer has to be Arjun das, A career-defining performance. Great Music that fits the story and brilliant Cinematography. Overall a Brilliant Vijay film and a masterstroke direction from Lokesh. Must watch, totally worth the wait! I would give an easy 8.5/10. I’m a neutral audience member, watch movies for what they are, and don’t judge or partialize a certain actor or such.

Santhosh: #Master First half Fans will go mad. Opening scenes goosebump guaranteed Every scene are colorful.. 4/5. Waiting for the second half.

BbTroll12: #Master – Watched it!! Don’t know what to say. Highly mixed feelings, towards disappointment. Enjoyed Vijay’s performance (is he really 40+?) and he smashed it outta the park! But the film from start to end never connected with me one bit. The shoddy effort from Lokesh! 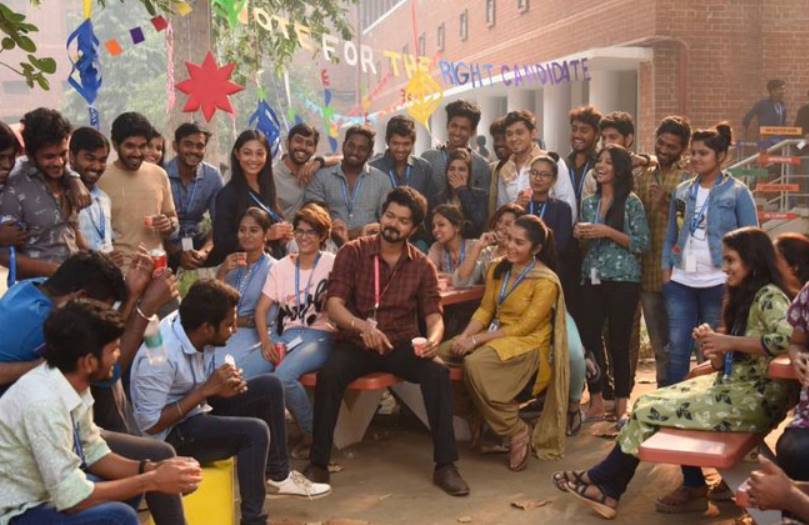 Girish: Enjoyed the 2:45 am SGT premiere show at Carnival CSG! Don’t expect any reviews from me – Respect the work the entire team of #Master has put in the last 1.5 years! Folded hands Go watch and support good cinema Movie camera

Pavan: Second half is not as good as the first yet takes smoothly to the final clash. The climax fight is a treat to watch. The movie is action-packed with so many trademark fun elements by Vijay and VJS. This is a treat. GO FOR IT..!!

Rithwik D’Cruz: Excellent first half with fewer dialogues but Vijay’s mannerism speaks. No boring scenes until the interval, The Pre interval block so engaging.

Master is a perfect commercial film, the movie can easily satisfy the fans of actor Vijay. Lokesh’s neat writing is one of the biggest strengths.

Stay tuned for the latest update!

Lokesh Kanagaraj’s directorial film has many famous stars Vijay, Vijay Sethupathi, Malavika Mohanan, Andrea Jeremiah, Shanthanu Bhagyaraj and Arjun Das in the lead roles. The Master music was composed by the rockstar Anirudh Ravichander, while Sathyan Sooryan did the cinematography and Philomin Raj worked as an editor.
The bank rolled jobs were done by Xavier Britto under his production company XB Film Creators. Lalit Kumar and Jagadish Palaniswamy are the co-producers of the film. The former also distributed the film under the banner Seven Screen Studios.

The post-production of the master was completed in early 2020, while the shooting happened in October 2019 across places such as Chennai, Delhi, Shimoga, and Neyveli. The movie was scheduled to release in April 2020, due to novel coronavirus, it was postponed to January 2021, almost a year. Say No to piracy, watch Master movie in Theaters. According to the sources, the Telugu version of Master released across 600 theatres in Andhra Pradesh and Telangana. Due to demand in Northern states, the maker dubbed the movie in Hindi also, ‘Vijay The Master’ released over 500 screens across the states such as Central India, Rajasthan, Delhi, Uttar Pradesh, and East Punjab in all language versions.

A modern commercial Masterpiece that will pave the way to more grounded and story-focused films with relevant themes.