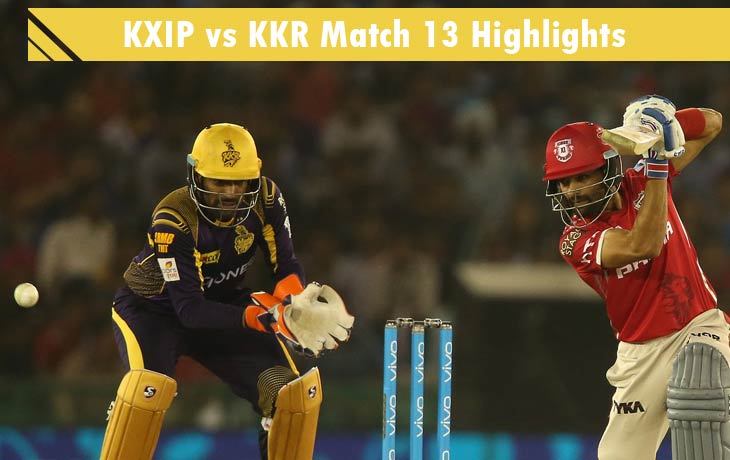 There were only Two sixes are aired in the sky on this innings by Marsh and Abbott. The Opening Batsman Murali Vijay scored 26 Runs with Four Fours without any sixes. His opening partner Vohra Dismissed with the score of 8 in 12 balls. The evergreen player of KXIP, Marsh played his today’s match until to the end of the innings with the score of 56 in 41 balls with Single Six and Five Fours. After that, all other players such as Miller, Maxwell, Saha are gone with the single digit runs. Finally, the team makes a target for KKR as 138 runs.

Read the Preview about the Match 13 KXIP vs KKR

The Opening batsman Uthappa and Gambhir itself make the total score 82 in 8.3 Overs. Uthappa scored 53 runs in 28 balls and finally got Out by Pradeep Sahu. At that time, the team skipper Gautham Gambhir scored 22 runs in 23 balls. After Uthappa, Manish Pandey was there to score the runs for his team.

Here, it is another Big Wicket. The Team Captain was gone with the run of 34 in 34 balls which include 3 fours. By the Same bowler who picked the last wicket of this match. Maxwells made the dive and catch the ball with ever perfection here before.

Pandey takes his charge and started hitting Four from the over 12. Shakib Al Hassan is there now, play with Pandey.

KKR need another 34 runs with 8 wickets in 49 balls remaining at the end of the 12th over.

Axar Patel picked the wicket of Pandey on the first ball of the 14th over. At this dismissal, Pandey scored 12 runs in 11 balls with a single Four. Suryakumar Yadav is in at Number 5.

One more Out is here, Shakib Al Hasan was caught by Sandeep Sharma with the score of 11 runs in 15 balls with a Four.

Yusuf Pathan Hits Continuous Four at the Over of 17. And the Match was Over at the First ball of 18th over by Suryakumar Yadav’s FOUR.

Pradeep Sahu Bowled well by giving just 18 runs in 4 overs and maintain his economy rate as 4.50. 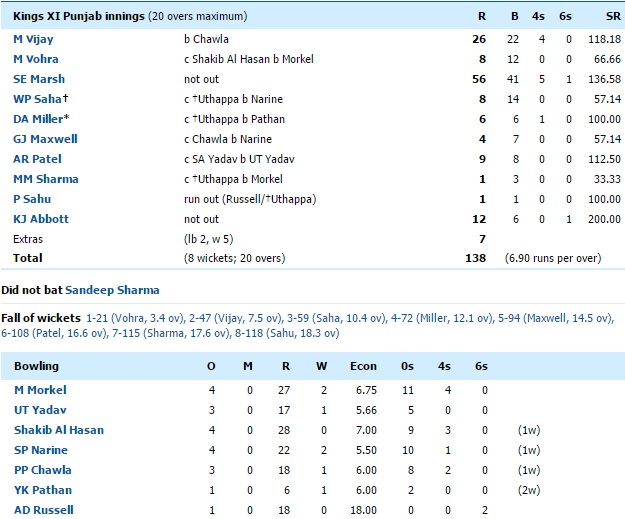 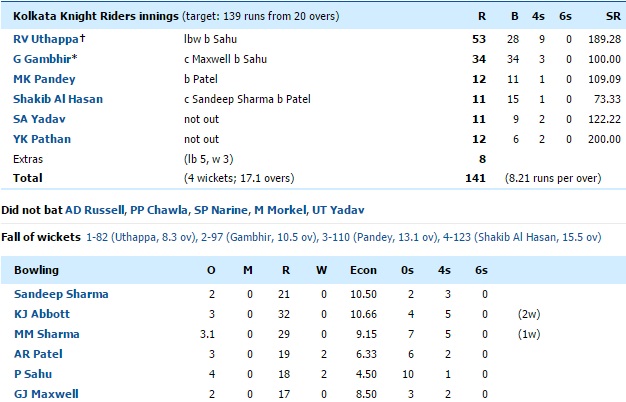