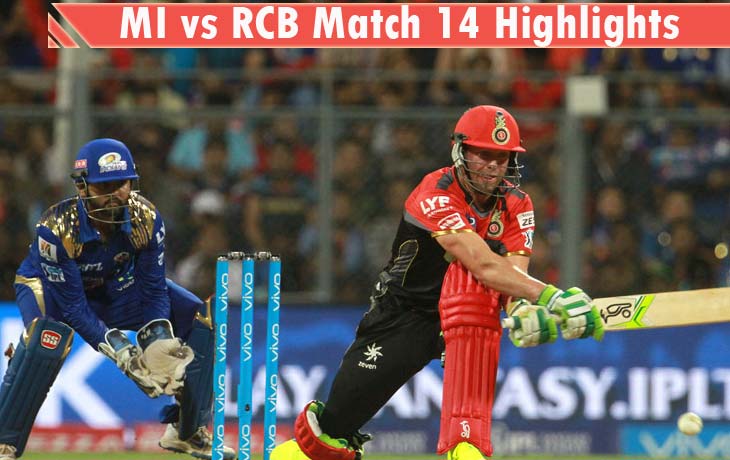 The Team skipper, Virat Kohli paired with a new player called Lokesh Rahul and played the match with the proper score of 33 runs in 30 balls with three fours. Lokesh Rahul went out with the runs of 23 in 14 balls included two fours and two sixes. Whereas, McClenaghan took the wicket with the help of Harbhajan Singh catch.

AB de Villiers totally scored 29 runs in 21 balls with the three fours and one six. And he walks towards the pavilion at the over of 10.6. Then the Australian Cricketer Travis Head scored highest individual score of the innings as 37 in 24 balls with two fours and two sixes.

Read the Preview about the Match 14 MI vs RCB

Bumrah took three wickets at the end of the innings over such as Travis Head at 19.1 as a runout, Stuart Binny at 19.5 with the help of Hardik Pandya’s catch. Sarfaraz Khan scored 28 runs in 18 balls with the same two sixes and two fours. Finally, he was caught by Krunal Pandya at the 19.4th ball.

Tim Southee bowled well with the economy rate of 6.25 and Jasprit Bumrah picked three wickets by giving 31 runs. Krunal Pandya is a second best bowler of this match, he gave only 27 runs in 4 overs and took two wickets for his team.

The Match started and going on with the opening batsman of the team skipper Rohit Sharma and keeper Parthiv Patel. At the ball 1.1, Parthiv Patel caught by AB de Villiers on Richardson ball.

As of now, in the over of 7.4, the team scored 63 runs by one wicket with the score of Rohit Sharma‘s 36 runs in 24 balls included two sixes and two fours. Ambati Rayudu scored 20 runs with the three fours of his 17 balls.

At the end of 13.0 Overs, Mumbai Indians scored 110 runs by three wickets. Rohit Sharma went Out with the Half Century as 62 in 44 balls with Four Fours and three sixes. Ambati Rayudu scored 31 off 23 balls with the Five fours. He was caught by Richardson on Iqbal Abdulla balls at the over 10.2.

Pollard Makes the Mumbai Indians Victory by 6 wickets with 12 balls remaining. He scored 40 runs off 19 balls with the Four Fours and Three sixes. Buttler scored 28 in 14 balls in two fours and two sixes.

Mumbai Indians Won the Toss and Chose to Bowl First 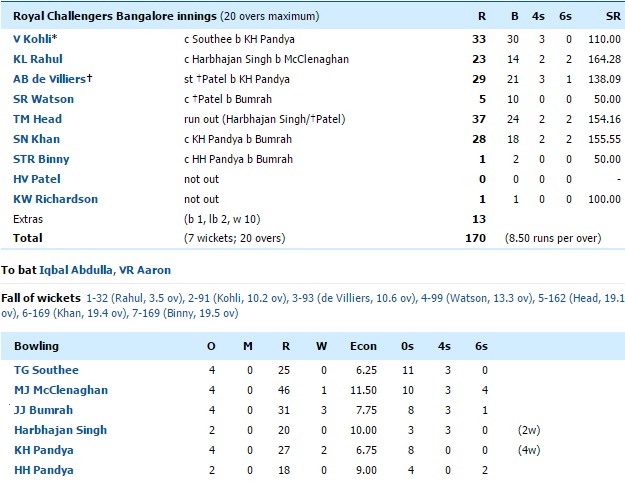 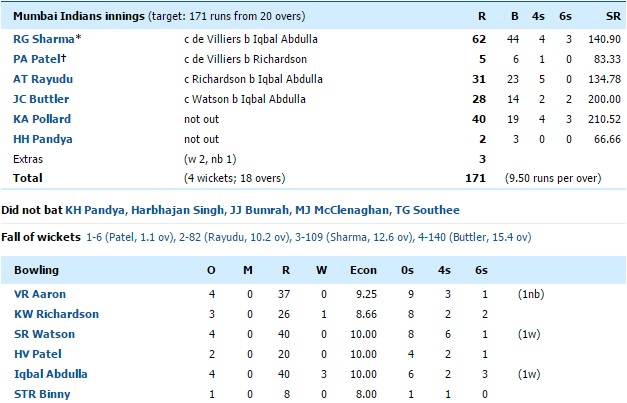