Gujarat Lions vs Sunrisers Hyderabad, GL vs SRH Highlights: Raina’s team didn’t perform well as like their before matches. Sunrisers bowlers played well in the first innings of this 15th IPL 2016 match. Scroll down to view the Full Scorecard and MI vs RCB Highlights. 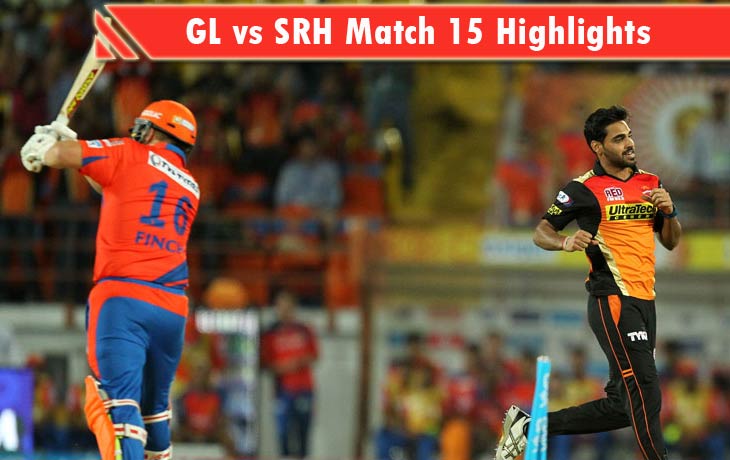 The Hat-trick Century Man, Finch went out in this Fourth Match of Gujarat lions with Zero runs off Four Balls in the Bhubaneswar Ball. And mainly it has happened in the First over of the Match. Raina joined with the McCullum as No. 3 and scored 56 runs on their partnership.

At the 7.2 Over, McCullum was Caught by Deepak Hooda on the Bipul Sharma’s Ball. Whereas, Bredon McCullum walks into the pavilion with the score of 18 runs in 17 balls with an each four and six.

Dinesh Karthik also dropped at the over of 9.6 on Deepak Hooda’s ball with the score of 8. Bravo also didn’t play well, and the following batsman is also gone out with single runs.

Again the Final Over of this Innings was bowled by Bhuvneshwar Kumar and picked Three wickets especially Lions Skipper Raina at 75 runs in 51 balls.

At the End of this innings, Gujarat Lions scored 135 runs by 8 wickets with only one Six.

The skipper David Warner smashed his balls from all the seven bowlers of Gujarat Lions. Sunrisers Hyderabad Makes a special star Mark from this IPL 2016 without giving any wickets, they won the Match with 31 balls remaining.

David Warner scored 74 runs in 48 balls with the Nine fours and his partner Shikar Dhawan also break the meme around his name because his poor performance in last three matches. Dhawan also scored half century as 53 runs in 41 balls with Five Fours.

The Highest Run Partnership on the First Stand Ever in T20s 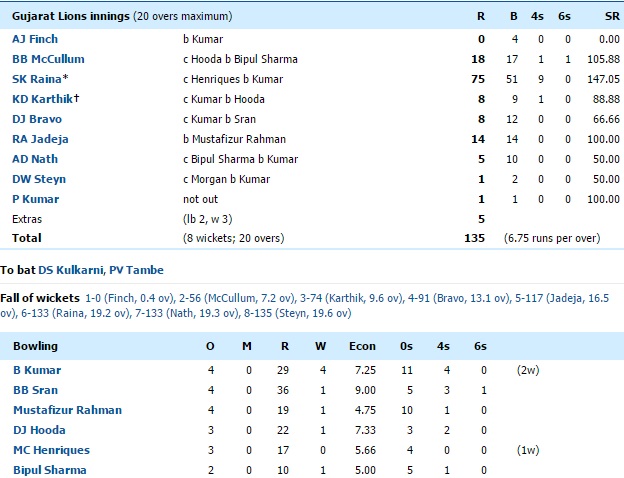 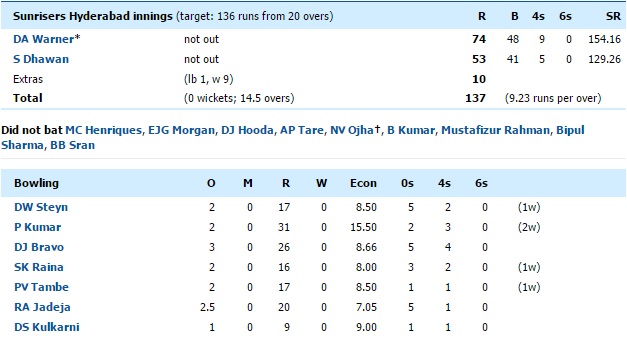