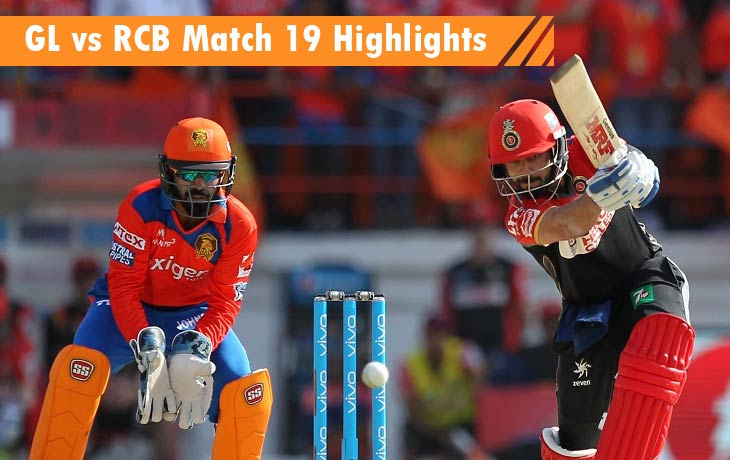 The Skipper of RCB and opening barsman, Virat Kohli marked his name as a Second Man who scored century in this IPL 2016 by this match without losing his wicket. His opening partner went out with the run of Six. the Third Man also way out with the score of 20 in 16 balls with two fours. And the pair of Lokesh Rahul and Virat Kohli scored 121 rus as a Partnership. Finally Lokesh Rahul also reached half-century as 51 in 35 balls with 3 sixes and four fours. the Captain of RCB scored 100 runs in 63 balls with eleven fours and a six.

Dhawal Kulkarni and Pravin Tambe only took each wicket with the economy rates of 9.75 and 8.00. The spinner Jadeja controlled the opponent runs by his spin and he maintained his economy rate as 5.66. As we said as early on the GL vs RCB Match preview article, the Jadeja and Tambe played his part as well

The Opening Batsman named as Dwayne Smith and Brendon McCullum joined their hands and scored the run with their Partnership as 47. In the ball 5.2, Smith caught by de Villiers on the ball of Richardson as the First wicket of this innings.

McCullum also went out while the team score is at 87. On that time, he scored 42 runs in 24 balls with 5 fours and two sixes. However he is the Second highest player of this innings.

The Third wicket was fall on the over of 15.4 by the Yuzvendra Chahal’s ball. He scored 28 runs in 24 balls with three fours and without any sixes. Dinesh Karthik paired with Suresh Raina and scored 28 runs individually. After Raina’s wicket, Jadeja Hands with Karthik. Both of them partnership scored 38 runs as the run rate of 9.02.

Final Over of this Match, Shane Watson bowled with the beginning No Ball with Free Hit. The sensational Wicket was fall on the next ball on this Over. So Brove gets inside the Ground and went out by stepping with the Champion Dance because of his FOUR. Gujarat Lions win the match by 6 wickets. 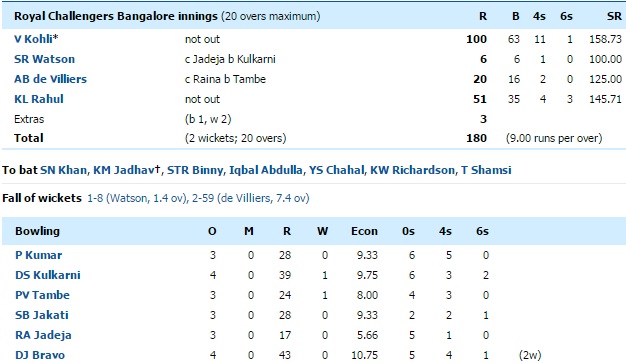 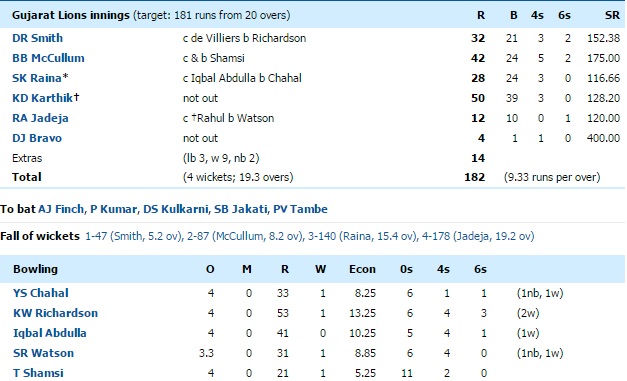