Hashim Amla went out on the 7th Over of the First innings in this 36th Match. Stoinis took his walk towards pavilion with 52 runs while the team score was 106.

Maxwell fired with Single Six and he also went Out by Morris. On that time, the team score was 152 (17.6 Overs).

Muhammed Shami and Zaheer Khan picked One Wicket as each. Chris Morris took two wickets by giving 30 runs. Amit Mishra gave 37 runs in Four Overs as a Highest on this First innings of this Match 36.

The second wicket was fall in the 13.4 Over by the same player, Marcus Stoinis. He scored 49 runs in 35 balls with a Six and 4 Fours. After that, there have no other players to perform as well.

The team can’t able to win the Match 36 were held at Punjab Cricket Association IS Bindra Stadium, Mohali, Chandigarh.

Marcus Stoinis took another one more wicket (Sam Billings). He is the MOM of today’s Match.

Delhi Daredevils Won the Toss and Chose to Bowl First

Man of the Match is Marcus Stoinis (Kings XI Punjab) 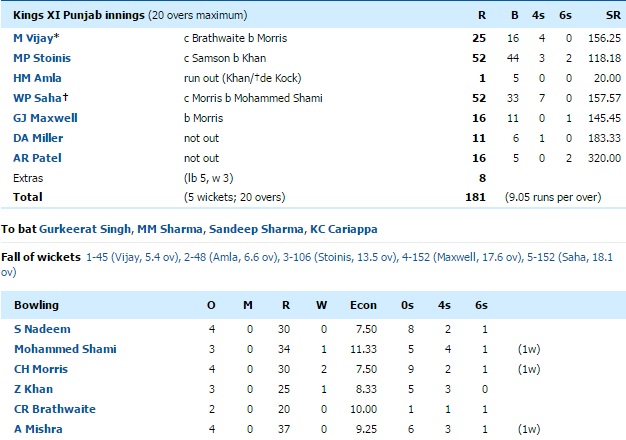 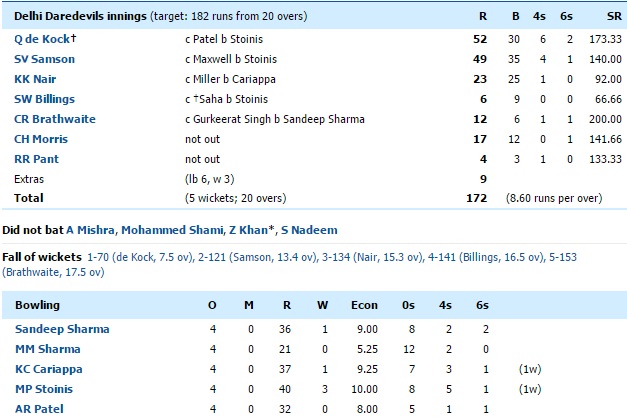