Royal Challengers Bangalore vs SunRisiers Hyderabad RCB vs SRH Highlights: The Fourth Match of IPL’s ninth edition was played on April 12th, 2016. The match was started with the batting of Kohli’s PLAYBOLD by the winning toss of Sunrisers, David Warner won the TOSS and elected Field. Scroll down to view the Full Scorecard of RCB vs SRH. 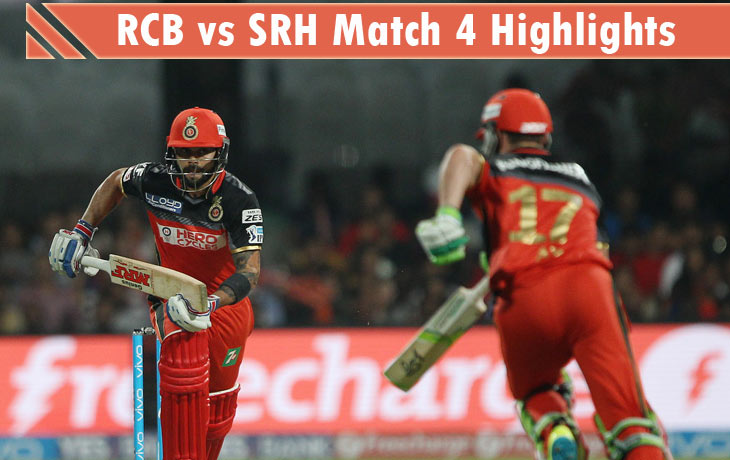 The team openers, Chris Gayle, and Virat Kohli both walk into the ground with some plans, but it was collapsed at the first over itself by Bhuvneshwar Kumar‘s ball. After that AB de Villiers joined with the team skipper and rocks the ground. The partnership of Kohli and De Villiers makes the score on above 100 within 10 overs. At the time of 11th over, AB scored 58 runs with 4 sixes and 5 fours in 30 balls. On the opposite side, Kohli ran and scored 41 runs in 35 balls with a single six and 4 fours.

Virat Kohli also bowled with the Bhuvi’s over and De Villiers caught by Morgan on Mustafizur Rahman 17th over. The Next ball was also Wicket, whereas Shane Watson walks towards the pavilion with the runs of 19 included three respective sixes. An expected total score 227 was reached with the help of Sarfaraz Khan‘s quickest score 35 in 10 balls.

David Warner, the Captain of SRH started the match with the good run and he was out in the 8.4 Watson overs. And he is the only batsman in today’s match where he hit Five sixes. After that, no one performed as much as this except Ashish Reddy, he scored 32 runs in 18 balls. Karn Sharma and Morgan, both of them played till the end of the innings with 22 and 26 runs.

Watson and Chahal picked two wickets each. Parvez Rasool and Adam Milne took a wicket each.