Rising Pune Supergiants vs Delhi Daredevils, RPS vs DD Highlights: RPS Won the Toss and chose to BOWL. Their opponent, DD scored 121 runs by giving 6 wickets. Karun Nair is the highest run scorer of the first innings of this 49th IPL 2016 Match. Scroll down to view the Full Scorecard and RPS vs DD Highlights. 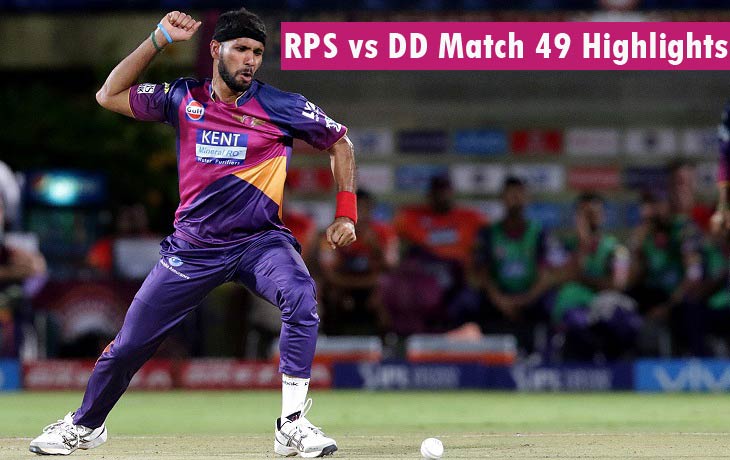 The wicketkeeper of Delhi Daredevils, Quinton de Kock just scored 2 runs by facing 8 balls on the third over of Dinda’s first ball. It is lbw.

Shreyas Iyer is OUT on the Dinda’s over, 4.5. The ball was caught by Usman Khawaja. Iyer faced 10 balls and scored 8 runs with single four.

Dhoni’s stumping, Sanju Samson is the Third wicket. He went out from the ground on the over of 9.6 by Adam Zampa. He scored 10 runs in 13 balls. While at that time, the team score was 49.

Rishabh Pant attempted an across-the-line slog but the away-moving delivery helps take the outside half of the bat. Skied and taken at long-off. It is Zampa’s Second wicket in this Match. Rishabh Pant scored 4 runs in 9 balls.

The Highest run scorer of today’s Delhi Daredevils player, Karun Nair fall by the Zampa’s lbw at the 14.3 over. He scored 41 runs in 43 balls with Five Fours.

JP Duminy is the last and sixth wicket of this match; it is another wicket for Dinda on his 18.2 over.

Chris Moris overtake this Match and made their team score somehow good. He scored 38 runs in 20 balls with 4 Fours and 2 Sixes.

Ajinkya Rahane scored 42 runs in 36 balls with five fours and one six. George Bailey just scored 8 runs by facing 18 balls with a single four. His strike rate is 44.44.

RPS Won the Toss and Chose to BOWL First

Man of the Match is AB Dinda (Rising Pune Supergiants) 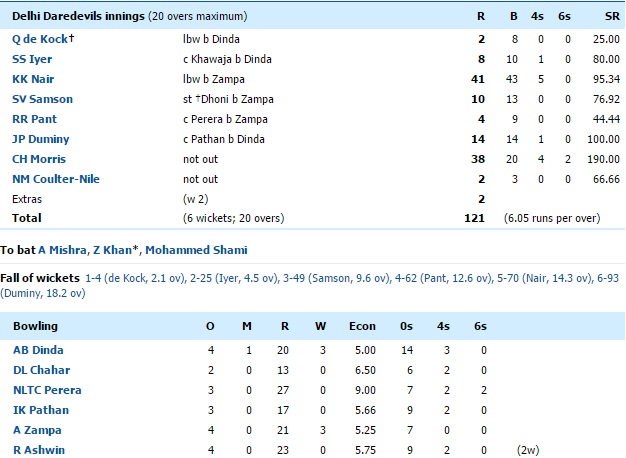 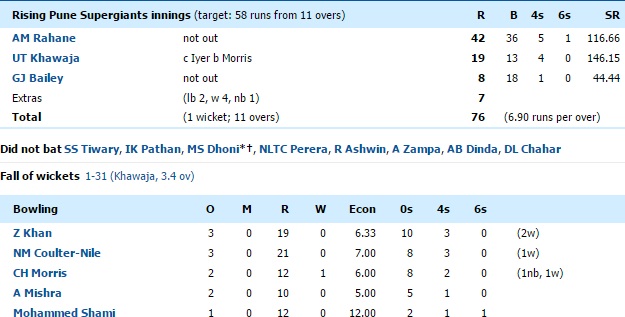