Kolkata Knight Riders vs Mumbai Indians KKR vs MI Highlights: The Fifth Match of IPL’s ninth edition was played on April 13th, 2016. Gambhir’s team took their bat first by winning toss of Rohit Sharma. Sunil Narine is absent in this match also. And there have some changes on both of the team playing XI. Scroll down to view the Full Scorecard of RCB vs SRH. 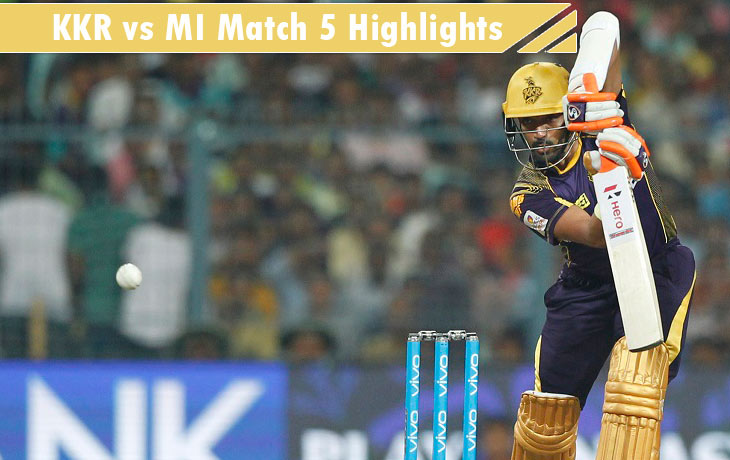 The Openers of Kolkata Knight Riders, skipper Gautam Gambhir, and Robin Uthappa started the innings batting with some sort of slow with single runs in the Southee and Bumrah’s over. The First Four of this innings was hits by Uthappa on Southee’s second over. At the end of 2.6 over, the team score is 19 for Zero wickets.

One of the Big Wicket falls at the over of 3.4, it is Uthappa by the McClenaghan ball. Actually, the batsman tried to pull the ball and it takes a time delay. So, the ball handed on Pollards hand.

Continuous one-by-one Four by the team Captain on the fourth over of Southee. The team score at the end of over 6, it is 40 for one wicket.

Manish Pandey and Gambhir played well and scored 50 runs each when the team score is 115 at the over of 12.4. Actually, Gambhir reached this half mile at the over of 11.5 by the McClenaghan over.

The Highlight of this each 50 is Manish Pandya hits the run by 3 sixes and 3 fours in 26 balls. But the co-player is batting as most of singles and dots with the balls of 41.

Gambhir caught by the wicketkeeper of MI, Parthiv Patel. Whereas the Full delivery ball on leg and the ball were lobs up on the back side as high. He went out with the score of 64 runs. Russell made the quickest score with the four massive sixes. He missed the forehand ball at the middle stump of the over 17.2 by McClenaghan. He scored 36 runs in 17 balls.

The Final ball of the innings is faced by the Yusuf Pathan, and he swiped the bat on the reverse to the back side, it reaches the boundary. The innings ends with the team score of 187 for 5. The last over of this match, Bumrah gave just 7 runs.

The First wicket of Mumbai Indians is fallen on the over of 5.5 as a run out of Parthiv Patel; he scored 23 runs with 4 fours. Again, Hardik Pandya scored only 9 runs and the ball was caught by Manish Pandey on Piyush Chawla’s 10th over.

McClenaghan, who took two wickets of Kolkata Kight Riders. He played on the batting no. 4 with the score of 20 included 3 sixes. Munro takes the catch on the over of 11.5 by Kuldeep Yadav.

Jos Buttler takes his bat with extraordinary power and hits the ball towards on the air. On 16.5 Overs, he scored 38 runs in 16 balls with 3 sixes and 3 fours. At the end of 17th over, Mumbai Indians need 22 runs in 18 balls.

Hastings fantastic 18th over, controls the Mumbai Indians run rate. In this over, he gave only 4 runs.

It is Out, Buttler’s ball goes on high within the circle of the ground, the ball bowled by Russell and caught by Yadav. Three Continuos FOUR by the team Captain at the over of 19. Mumbai Indians won the match by 6 wickets.

Player of the match on KKR vs MI – Rohit Sharma (MI)

Bookmark (Ctrl + D) this website for to get more instant updates on upcoming matches.

Myanmar Earthquake – Hits Some Parts of India Too | 6.9 Magnitude

Myanmar Earthquake - Hits Some Parts of India Too | 6.9 Magnitude