Gujarat Lions vs Kolkata Knight Riders, GL vs KKR Highlights: GL Won the Toss and chose to BOWL. Their opponent, KKR scored 124 runs by giving eight wickets. Yusuf Pathan is the highest run scorer in the first innings of this IPL 2016 Match 51. Scroll down to view the Full Scorecard and GL vs KKR Highlights.

GL vs KKR Highlights: Man of the Match is Dwayne Smith

Gujarat Lions Won the Toss and Chose to BOWL First

Man of the Match is Dwayne Smith (Gujarat Lions)

The Right-hand Batsman and opener of KKR, Robin Uthappa was dismissed by Dwayne Smith’s 6.2 Over. He scored 25 runs 19 balls with single six and three fours.

The Captain of KKR, Gautam Gambhir just scored eight runs in 8 balls with a four. Run out by Shadab Jakati on the over of Kulkarni’s 3.1.

Second Wicket of this innings was Manish Pandey; Suresh Raina caught him in the Dwayne Smith over,  4.2. He scored only one run by facing three balls.

Shakib Al Hasan also failed in this IPL 2016 Match 51. He was caught by Eklavya Dwivedi on Dwayne Smith’s bounce balls.

Suryakumar Yadav scored 17 runs in 14 balls. Dhawal Kulkarni’s catch dismissed him on the over of Shadab Jakati.

Yusuf Pathan was stood on the ground for long minutes and scored the highest score in this first innings as 36 in 36 balls. Another Wicket for Dhawal Kulkarni on 18.2.

Champion dance by Dwayne Bravo because of Jason Holder WICKET in the last over. Finch runs to his right side and clutching the ball on his chest. 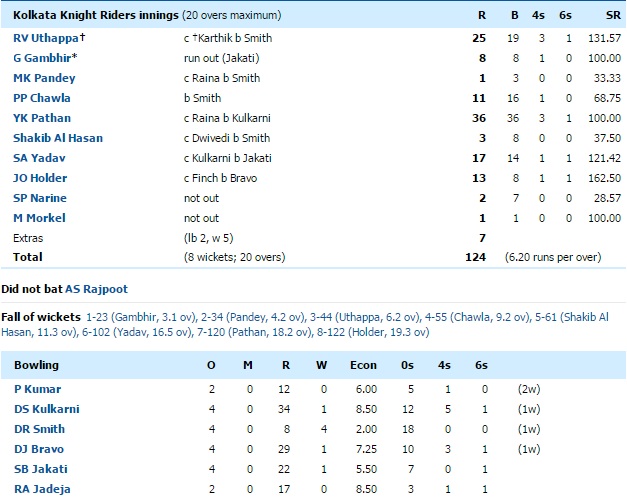 Dwayne Smith didn’t perform well in his batting. First Ball in the second innings by Ankit Rajpoot. It is Wicket. Smith gets an inside edge and Uthappa hangs onto the catch.

Another Wicket on Second Over. It is LBW by Sunil Narine. Brendon McCullum scored just 6 runs in 3 balls.

Morne Morkel hits the Dinesh Karthik’s middle stump at the over of 3.5. He scored 12 runs in 8 Balls.

Aaron Finch is run out by Robin Uthappa on the over of Sunil Narine’s 9.5. He scored 26 runs in 23 balls with Two Sixes.

The Gujarat Lions skipper leads his team to their Eighth victory. Suresh Raina scored 53 runs in 36 balls with seven fours and a six.

Ravindra Jadeja helped with his score of 11 in 11 balls. Gujarat Lions Won the Match by 6 Wickets with 39 balls remaining. 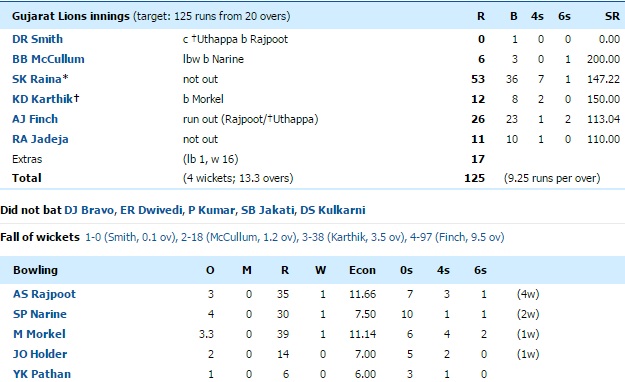