Kolkata Knight Riders vs Sunrisers Hyderabad, KKR vs SRH Highlights: SRH Won the Toss and chose to BOWL. Their opponent, SRH scored 171 runs by losing six wickets. Yusuf Pathan is the highest run scorer in the first innings of this IPL 2016 Match 55. Scroll down to view the Full Scorecard and KKR vs SRH Highlights.

Sunrisers Hyderabad Won the Toss and Chose to BOWL First

Uthappa scored 25 runs in 17 balls with the Four number of Fours. He was OUT in the over of 3.4 by the bowler Sran.

The second wicket was fall at the over of 5.6, Munro scored just 10 runs in 8 balls with the strike rates of 125.00. The wicketkeeper of Sunrisers Hyderabad Ojha is there to settles near the stump and closed his gloves while the batsman sweeps his bat in the Hooda's ball.

The KKR's skipper was the third wicket; he scored only 16 runs by facing 15 balls with a single Four. Again it is the Hooda's over. Henriques was there to catch his ball in the over of 7.3.

Manish Pandey is the second highest run scorer in this innings after Yusuf Pathan. He went out by the Bhuvaneshwar Kumar's 16 Over. He scored 48 runs off 30 balls with two fours and three sixes.

Mustafizur Rahman bowls his 17th over the fourth ball; it was called in numbers as 16.4. He through his ball as full toss towards Jason Holder. He also attends this ball with the effortful swing, but the ball was caught by Henriques.

Shakib Al Hasan just scored seven runs in 10 balls and processed his walk toward the pavilion.

Yusuf Pathan and Suriyakumar Yadav was there on the ground until the end of the innings. The Man of the Match, Yusuf Pathan scored 52 runs in 34 balls with three fours and two sixes. 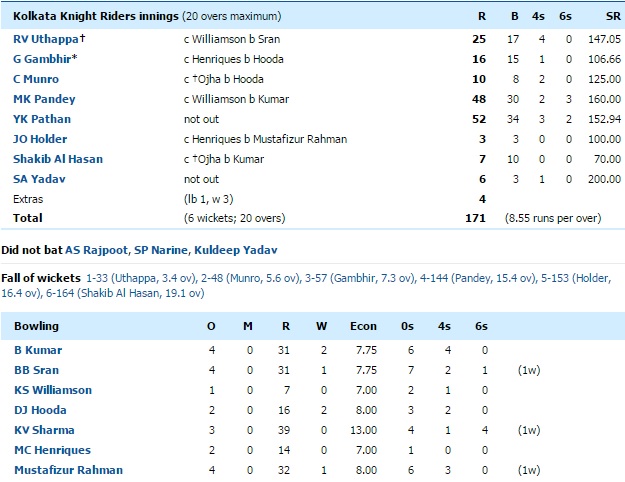 David Warner failed to stand throughout the match. His opening partner scored the highest score in the innings. Non of other didn't perform well.

Shikhar Dhawan scored 51 runs in 30 balls with Four number of Fours and three sixes. He was suspended by the Kuldeep Yadav's over.

Finally, the team can't be able to chase the KKR's target. The team has lost their eight wickets when the match was at the end of last over. 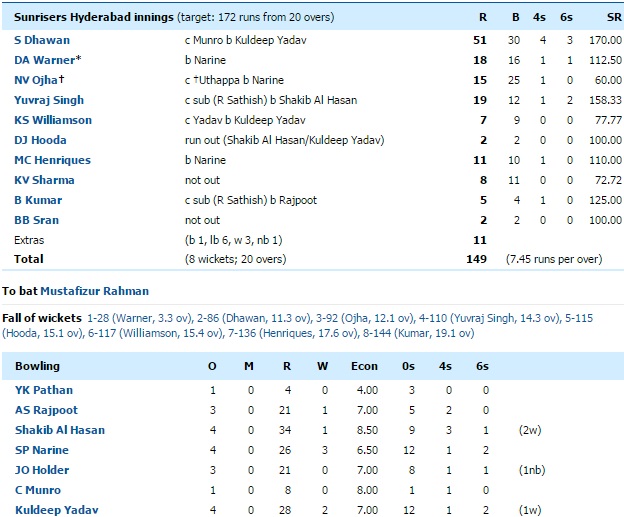