Gujarat Lions vs Rising Pune Supergiants, GL vs RPS highlights: MS Dhoni won the Toss and elect to Bat first. The Openers from Supergiants, Faf du Plessis and player of the match against with Mumbai Indians, Ajinkya Rahane. Scroll down to view the Full Scorecard and Highlights of GL vs RPS. 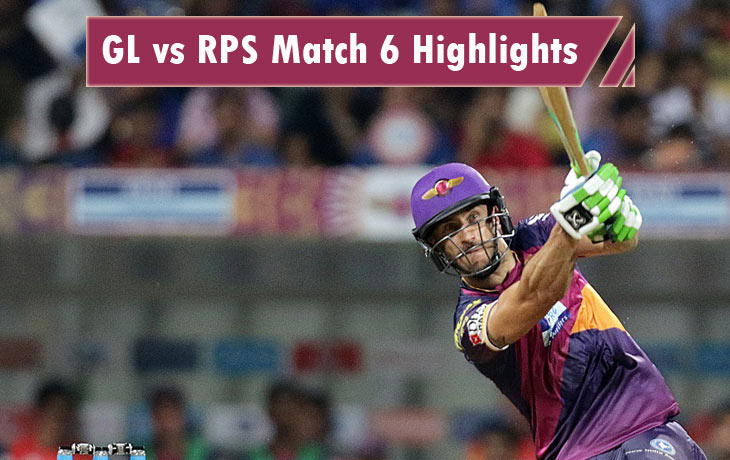 At the 10thover end, Rising Pune Supergiants scored 87 runs by one wicket. On last two over of this half of first innings, there was no Fours and Sixes by Du Plessis and Kevin Pietersen. It seems like the match going slow without any falling balls still upto 11th over.

Du Plessis 50 on 13th over of the last ball by hitting Four on Shadab Jakati Over. He gave totally 40 runs without any wickets.

Du Plessis out on the over of 15.4 by Dinesh Karthik’s stumping. At that time, he scores 69 runs with 4 sixes. Smith didn’t stand on the ground as a long time. Mitchell March is also gone with 7 runs.

The Captain Cool on the ground, he scored 22 runs off 10 balls with the last ball Four in this innings.

As a Previous match, Fitch played this game with extra power and scored half-century within 36 balls included 2 sixes and Seven fours. Bredon McCullum also paired with Fitch and made the confidence about the winning of the match at beginning overs itself. His ball is gone high on air within the short circle. Du Plessis catch that ball with some movements of leg beside. Raina came into the ground, the most run taker in the IPL. He was also played the games as good up to his score 24 in 24 balls with single four. DJ Bravo takes his position and fulfilled with hattrick Fours on the Ishant Sharma’s over. Bravo’s 17.6th over makes the innings as End, because it is an SIX. The Match was Ended with the winning of Gujarat Lions.

Dhoni talks about their team performance as “If you give away 60 in the first six overs while defending 160, it will always be difficult. I think we need to look at the composition of our side.”

Player of the match on GL vs RPS – Aaron Fitch (GL) 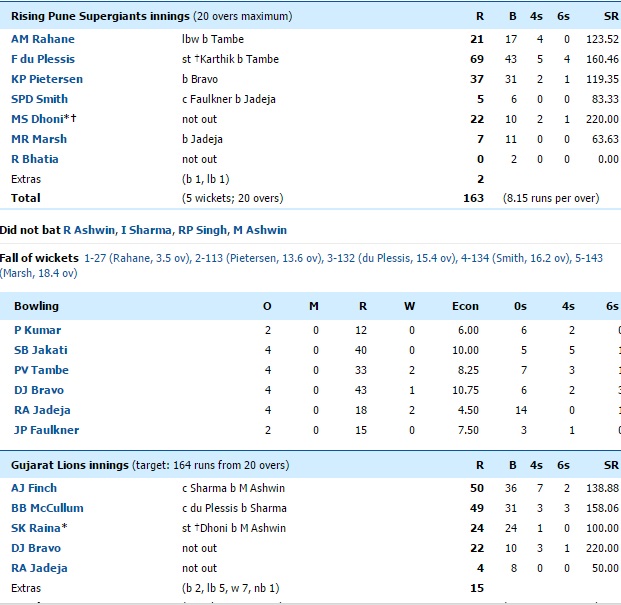