IPL Score MI vs CSK: The biggest cricket season of India is finally came once again with lots of new changes. CSK and RR turns have gave more happiness to their fans. Also, biggest Sports network stepped into this tournament as the first time to telecast live match on Television and other digital platforms. Because of the big tournament, fans can easily get the live score and can watch a live match at anywhere across the world.

Defending champions Mumbai Indians and the two-time champions Chennai Super Kings will meet face to face again on Saturday night at 8 pm IST. The game takes venue at Wankhede Stadium in Mumbai. So, this is the opening match of this IPL 2018 tournament. These two teams have met already in the IPL finals twice, both finals was ended with the result of each win.

In the last year, Mumbai Indians won the finals against MS Dhoni’s side Rising Pune Supergiants. Now, he back again after two years of absence with a new jersey, but yellow. Both of these two teams looking strong with their same top players as the maximum.

According to the analysis, today’s home team looking poor in their starting games in last five seasons. Rohit Sharma and his players need to avoid that to prove that they remain strong at opening matches of a tournament. It gives some results that CSK has a chance to win their first game of this IPL.

Update: Chennai Super Kings (CSK) have won the toss and have opted to field (bowl).

Today’s game will be 160th IPL T20 for both captains. But, MS Dhoni have more experience as a captain in the T20 format. 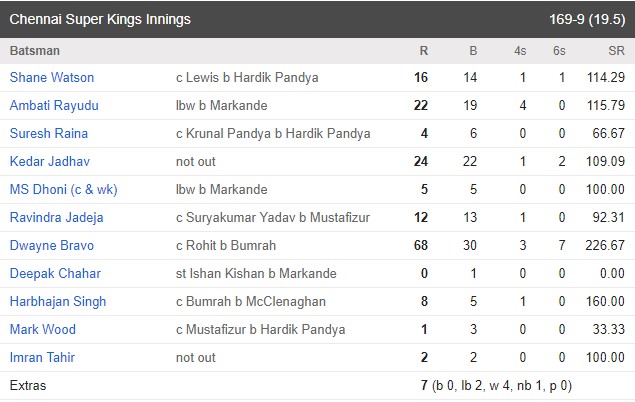 These two teams have met each other in 22 matches, in that, Mumbai Indians won 12 and Chennai Super Kings have won 10 matches. Also, CSK have won only two matches at today’s venue. MI have won five against CSK at Wankhede Stadium out of seven. From this point of view, there will be more chances for Mumbai Indians to win this first match.

Key Bowlers: For MI, Mustafizur Rahman and Jasprit Bumrah. For CSK, it is Dwayne Bravo.

Overall, it looks favor for Mumbai Indians to win the match. Though it is CSK’s return to IPL, they may carry different strategy as they also one of the top team in IPL career.

It is time to vote here:

MI next Match: MI’s first away match of the season against Sunrisers Hyderabad on April 12