Mumbai Indian Won the Toss and Chose to Field

Get the Score Card of this Match MI vs RCB Here. 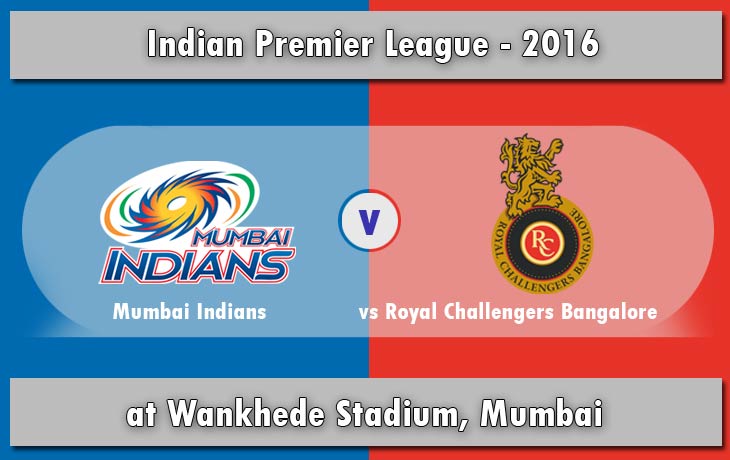 As of Now, both of the team played their matches with only one winning status out of Mumbai Indians Four played matches and Royal Challengers two matches. Both of the team face each other here today on IPL 2016 Match 14.

The team was defeated by the IPL 2016 debutants Rising Pune Supergiants and Gujarat lions at their Home ground on last matches out off Four. The team, MI will play their upcoming games on their Home ground in two matches against with Royal Challengers and Kolkata Knight Riders on 28th April 2016. Later, it will be sifted into Jaipur. So, it will be a chance to treat their fans with the celebration on their home ground.

Rohit Sharma‘s Unbeatable 84 runs against the team Kolkata Knight Riders is the good performance, and it is the only game they win the match. On other games, the top order batsman are didn't perform well. They Failed, even though, the team changes their Playing 11 against with Sunrisers Hyderabad.

Lasith Malinga absence affects the concern team from the T20 World Cup to present IPL 2016. As of now, the important key players for Mumbai Indians were the Tim Southee and Mitchell McClenaghan makes the match in their favour.

Harbhajan Singh shows his power against with the team SRH skipper, David Warner. So he also one of the key player in this team at the present situation.

We Knew that Virat Kohli's One of the unforgettable Stadium was Mumbai's Wankhede Stadium. Because he bowled the Last Over of the Semi-Final T20 World Cup 2016. His ball was smashed by the West Indies Andre Russell as a winning SIX. Here now, in this Wednesday (20th April 2016) his team meets the defending Champion Mumbai Indians.

Virat Kohli misses the big-hitting West Indian Chris Gayle, who has returned home to Jamaica to see his new-born son. We need to Congratulate to his Family at this time. Not only for this match. He will be absent for next two matches.

Congrats to @henrygayle on fatherhood! Gayle's partner Natasha Berridge is set to give birth this week #blushingbaby pic.twitter.com/QRTYg1Xidz

South African batsman Quinton de Kock, The First Man of this IPL series to reached the Hundred and makes the team RCB. AB de Villiers also played the match with some of the perfections and made the team towards the winning status.

But the team need to concentrate on the Bowling Combination. The Star bowler of the team, Australian Pacer Mitchell Starc is also absent for this match because of his Injuries.