IPL live score 2018 MI vs RCB: After winning a title of the season 10, Mumbai Indians lost their opening three matches of following season. The team had the same experience before in the 2014 season as they lost first five matches after winning IPL 2013. Now, they lie at the bottom of the IPL 2018 Points Table.

Today’s match on 17th April, Tuesday set to begin on 8 pm at Wankhede Stadium, Mumbai. This is 14th Match of this VIVO Indian Premier League season 11. RCB lost two matches in their last three matches and standing at sixth position in the table.

MI winning chance: In the IPL Twenty20 tournament, no other teams have defeated Royal Challengers than Mumbai Indians. RCB lost 13 games against MI out of 21 play so far in ten seasons. But, they recently stuck with their last over of a game.

All the last three matches ended with the twist of last over. CSK, SRH, and DD are won their games against MI in the last over with one wicket remaining. If they managed with their bowling, then Mumbai Indians will win this match.

RCB winning chance: Most recently, RCB conceded 217 runs against RR which is the highest of this season so far. But, today they can give better total against Mumbai Indians. Because Virat Kohli and AB de have scored many 50s and 100s at Wankhede Stadium in last limited over matches and test matches. So, RCB can win this match if they played well.

Update: Royal Challengers Bangalore have won the toss and have opted to field (Bowl). MI vs RCB playing XI available below: 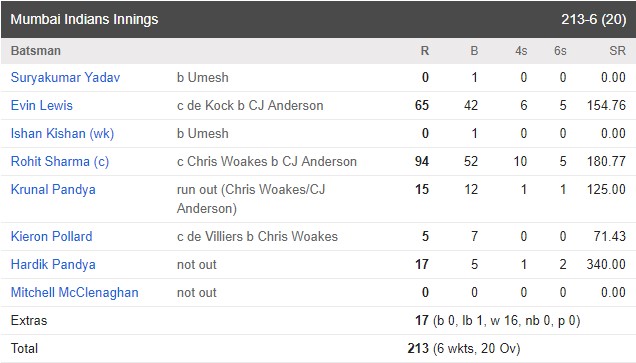 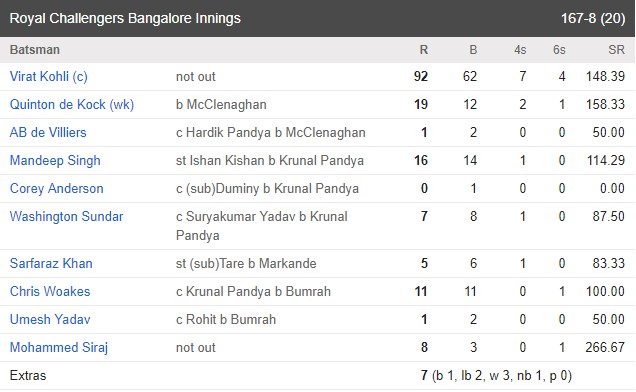 Match 14: MI vs RCB IPL 2018 Live Streaming match on Television and Online. Check the list by clicking the link given.

MI vs RCB Key Batsmen: Surprising Suryakumar Yadav’s opening and Evin Lewis top batting are one of the pluses for MI as they did lastly. Ishan Kishan also good in the top order of Mumbai Indians lineup.

The perfect duo of RCB: Virat Kohli and AB de Villiers have scored some individual high runs so far this season. AB de has scored 121 runs, while Kohli has gained 109 till now in this season. Today’s venue is their favorite as these two players have more beautiful memories with half-centuries and hundreds in recent matches. Apart from these two, Brendon McCullum also there to give big support for the team’s win.

In four innings of the last two years, AB scored 115 runs against Mumbai Indians (33 runs from Krunal). For RCB, they having Washington Sundar to take top wickets of Mumbai Indians. Also, Umesh Yadav, Kulwant Khejroliya, and Chris Woakes are there to give better play.

Mumbai Indians Live match (next): After this match, MI will travel to Jaipur to play against Rajasthan Royals on April 22 at the Sawai Mansingh Stadium.

Royal Challengers Bangalore Live match (next): RCb will back to their home and will play their match against the Delhi Daredevils on April 21 after the 3-day break after today’s match.