Mumbai Indians vs Rising Pune Supergiants MI vs RPS The First Match of IPL 2016 was started with the game of Mumbai Indians Batting. The Current IPL champion didn't perform well and failed to win the match at their home ground. The Opening batsman, Ajikya Rahane and Faf du Plessis played their game as well and make this match for RPS win. Scroll down to view the Full Scorecard of MI vs RSP. 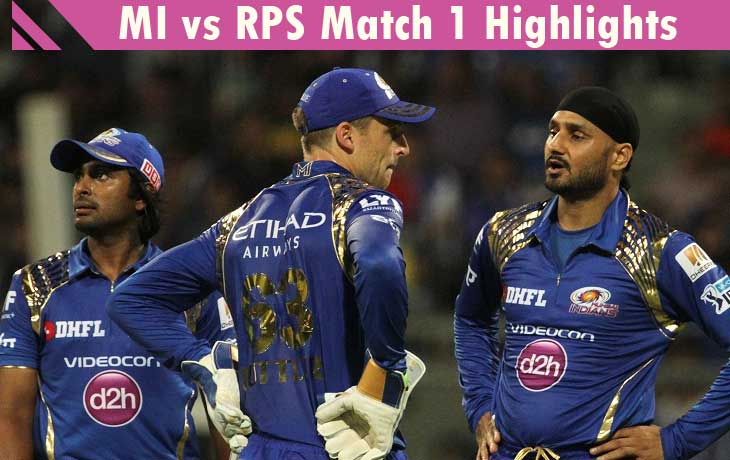 The team skipper Rohit Sharma, Lendl Simmons, Hardik Pandya, Jos Buttler Kieron Pollard, and Shreyas Gopal has all went out from the Wankhede Ground with Single Runs. However, Ambati Rayudu scored 22 runs with 2 fours and the off-spinner, Harbhajan Sigh took the charge at the moment for his team and scored 45 runs in 30 balls with 7 fours and One six. Whereas, Vinay Kumar also joins his hand with Harbhajan Sigh for the little period and scored 12 runs with a single six. The team Scored 20 plus runs at the last over of the match and fixed the target for Rising Pune Supergiants as 121.

In Dhoni's RPS, Ishant Sharma picks first two wickets at the beginning of the match itself. On the second over first ball, Rohit Sharma faced the ball from Ishant Sharma, and it struck low enough on the front pad and in line with the stumps. Simmons was also dropped his play on Ishant's over. Mitchell Marsh took two wickets in his first over of this match; Pandya went out on his first ball of 4.1 and Buttler went out from his last ball of that over, 4.6. Rajat Bhatia controls the opponents score with the proof of his economy rate 2.50 for Four overs. The New player from Tamil Nadu, Murugan Ashwin also paired with Bhatia and drove the Mumbai Indians score as Low. He performed well with the good economy rate as 4.00. Ravichandran Ashwin bowled only one over, that too, he took one wicket with the help of Faf du Plessis catch.

The Powerplay was played by Ajinkya Rahane and Faf du Plessis; both partnerships makes the fantastic beginning strength for Supergiants. Rahane scored 66 runs and stood on the ground till the last six of the match at 14.4. He reached the maximum of balls on the lower drive towards boundary as Seven Fours and also he Raised his bat towards Six at the last over of this winning innings. Faf du Plessis only went out on Harbhajan's spin; he tried to sweep his bat on the back side as against spinners, but the ball placed the gap and clatters onto his leg stumps. It is first and last wicket of RSP. Kevin Pietersen didn't play his ball for Fours but he aimed to make it as Six. Yup..! he scored 21runs in 14 balls with two Sixes.

McClenaghan, Bumrah, Gopal and Harbhajan Singh bowled three overs each and gave 99 runs. However, Harbhajan Sigh only took only one wicket for his team. The match was ended with Hardik Pandya's first over, he bowled 4 balls as 2 dot and 2 sixes. The Game was over with RPS's Win.

Stay tuned for more updates about this 9th session IPL 2016.!