Microsoft ChakraCore: The company, Microsoft announced that they bringing ChakraCore to the Linux and Mac OS X. The Microsoft Edge users are known about the details of ChakraCore. It is the open-source JavaScript engine for the Universal Windows Platform and Microsoft Edge on the Operating System of Windows 10. 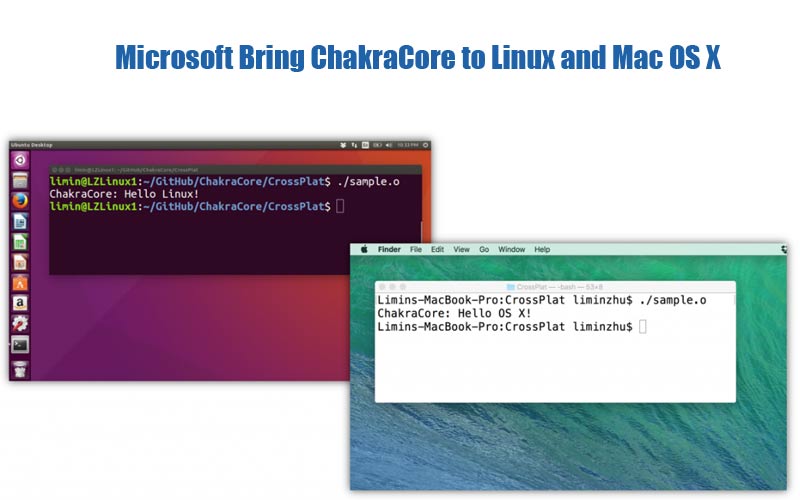 The Microsoft Edge Developers published an article today about this announcement. In that, Microsoft states:

Bringing ChakraCore to Linux and OS X is all about giving developers the ability to build cross-platform applications with the engine. The JavaScript Runtime (JSRT) APIs to host ChakraCore were originally designed for Windows, so they inevitably had a few Windows dependencies – for example, Win32 usage of UTF16-LE encoding for strings, where other platforms might use UTF8-encoded strings. As part of enabling cross-platform support, some of the JSRT APIs have been refactored and redesigned to allow developers to write platform agnostic code to embed ChakraCore. Maintaining backwards compatibility is a core principle that we follow – so applications written with the previous set of JSRT APIs on Windows will continue to work as is. You can build the engine and write a Hello-world app to get started with ChakraCore on the Windows/Linux/OS X.

This update is a beginning process to enter into the Linus and OS X. The Microsoft Edge developers can be able to build the cross-platform application easily on Linux / OS X. Get the Full details about this update by clicking here.

This Update will continue and improve for the further steps in upcoming months, said Microsoft. The company has announced and launched this cross-platform code editor already on a few months back.

The Article explained about the recent Microsoft ChakraCore updates by the following headlines.