Misrata Airport Continues to Be Attacked

Following reports from our on-the-ground sources of an “explosion & fire” at Misrata International Airport, Libya on Sunday, 29th September, we approached AQINTEL to supply us with ‘before and after’ satellite images of the Misrata Airport. We wanted to gain a visual understanding of what had occurred at the airport, what kind of damage was caused, if any, and try to gain any additional information that could aid us in understanding more about the magnitude and source of the attack.

The satellite images taken of Misrata International Airport from 25th September 2019 show multiple ground-attack aircraft, including include L-39, Soko Galeb, and MIG-23 ground attack aircraft. The large burn-mark is from the destruction of an IL-76 in a previous attack. See image 1 below: 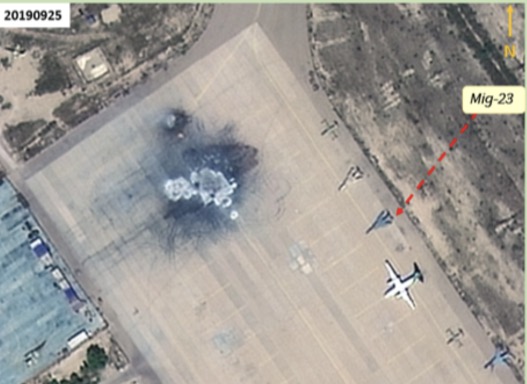 The satellite image taken of Misrata International Airport on 29th September 2019 show the damage caused by an airstrike, see image 2 below. 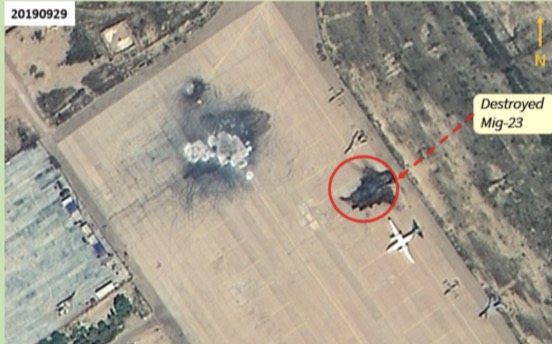 A GNA-operated MIG-23 fighter aircraft parked on the apron was struck & burned to the ground.

The lack of collateral damage to the apron & to nearby aircraft indicate a surgical strike carried out using precision weaponry.

Analysis of image 2 indicates that Misrata International Airport is continuing to host military aircraft & is in use by the GNA as a military base, despite claims to the international community & the UN that the airport is strictly a civilian facility.

The demonstratable military use of the same apron at this airport also casts doubt on the GNA claim that the IL-76 destroyed in this location previously was only transporting humanitarian aid & was not a legitimate military target. If this was true, the GNA would still be guilty of mixing its military assets amongst civilian/humanitarian assets in an effort to hide them or dissuade strikes, which is recognized as a war crime under the terms of the Geneva Convention.

The GNA, Libya’s internationally recognized Government of National Accord currently supported by the US and the EU (except for France), has been attempting to get the UN to declare sites such as Misrata International Airport as ‘civilian’, placing them in a protected status & putting them legally out of reach of attack. The satellite images and our on-the-ground sources show that the GNA are continuing to place & operate military assets in areas they define as non-military. There is no other explanation or reason as to why a mixture of armed, ground-attack aircraft would be parked on the apron of an airport.

The GNA mixing civilian and military activities at Misrata International Airport will no doubt further strain relations between the GNA and its western backers, particularly the US, and should be cause for alarm amongst the member states of the UN Security Council, whom risk their reputations should they allow themselves to be manipulated by parties to the conflict playing with the internationally recognized law of warfare.

Note: All satellite images are approved to use by any news publication as long as it is referenced to AQINTEL https://www.aqintel.net/. Information that has been gleaned from our on-the-ground sources should be referenced to our organization’s twitter handle @LibyaNewsLive1 or our website: https://www.libyanewslive.com/

Why Use CBD Cannabidiol Oil Drops for Anxiety and Migraines