MI won the TOSS and Chose to BAT First

Check the Score Card of MI vs RSP here 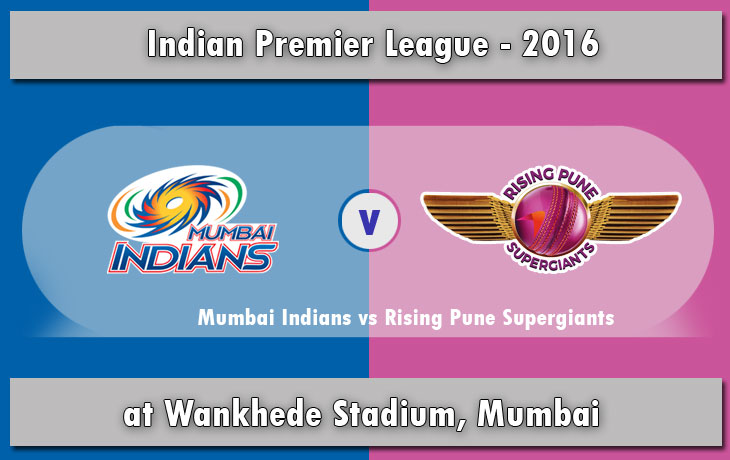 The Two-time title winner of IPL since in 2008, the Mumbai Indies going to face the new born team with the captainship of Mahendra Singh Dhoni, the new team was named as Rising Pune Supergiants.

The Batting Mumbai looks like a mixed lineup of Indian and Foreign players such as Rohit Sharma, Lendl, Simmons, Unmukt Chand and Ambati Rayudu. Here, Rohit Sharma placed his name as opener and skipper. Also, the Bowling queue packed with Lasith Malinga, Jasprit Bumrah, Mitchell McClenaghan and Tim Southee. 110 IPL wicket taker, Harbhajan Singh and Jagadeesha Suchith are also there to save the team from opponents. However, there are some blue jerseys with the capable of All-rounder, Kieron Pollard, Corey Anderson and Hardik Pandya. The two new boys from T20 World Cup India, Jasprit Bumrah and Hardik Pandya are also ready to face the Indian team Captain’s team. But the team have some difficulties, that is nothing, but how they arrange the Playing 11 for the match is the question.

The team suits up before the IPL opening ceremony ? pic.twitter.com/d6iLuy5jEs

The IPL has temporarily shortlisted two team; that is Chennai Super Kings and Rajasthan Royals, both of the team suspended for two years as per the Lodha Committee recommendations.

The CSK captain Dhoni and coach Stephen Fleming joined their hands again and formed the new team called Rising Pune Supergiants. The team has a batting lineup of Ajinkya Rahane, Kevin Pietersen, Steve Smith, Mitchell Marsh and Francois du Plessis along with skipper and wicketkeeper, Dhoni. Du Plessis and Dhoni will make the match on lower-middle order. Also, the bowling chip has been installed inside of Supergiants such as Adam Zampa, Murugan Ashwin, Ankit Sharma, and Rajat Bhatia. The Indian fans are eagerly waiting for the Ashwin’s ball with Harbhajan’s off-spin. RSP’s all-rounders are named as Mitchell Marsh, Ankush Bains, Irfan Pathan, Baba Aparajith and Thisara Perera.

The #SuperGiants are off to the #VIVOIPL inauguration ceremony! Wish them luck! #DumKaNayaRang @russcsk @msdhoni pic.twitter.com/5nqsv0e0Uq