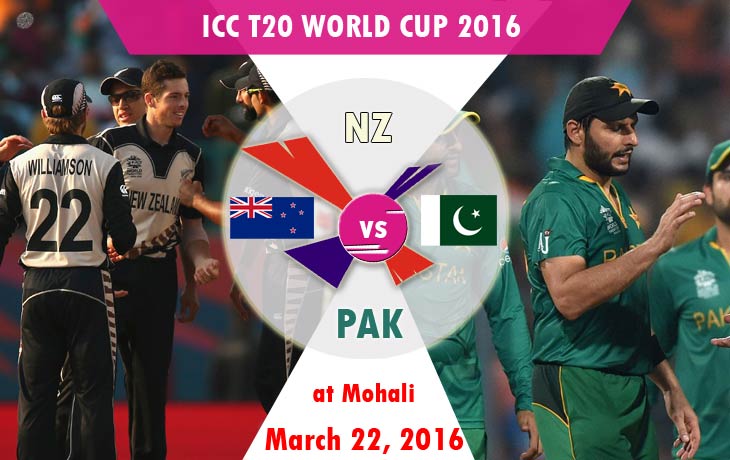 ICC T20 World Cup is nearing about the Semi-Final, there are only ten matches to go for that. It is 23rd Match for NewZealand and Pakistan, as both of the team played recently. So, there is some prediction about their play on today’s ground. It is the third match for both of them. Where, NewZealand going to play this match with their two victories and Pakistan with one.

From the Match 13 of ICC T20 World 2016: NewZealand won the toss and also match as first batting. We know, if Dhoni won the toss mean, he allowed the NewZealand for the bat first. He picks the bowl always on toss winning in T20s. Fortunately, NewZealand takes their victory because of their powerful spin on that pitch. One of India’s lowest run score in T20Is is this. NewZeland also struggled on their play; even Corey Anderson took over their team score as little high on his middle line-up. And the lower end, Luke Ronchi has been helped on the total score of the team. The player of the match, who got four wickets by giving just 11 runs on his four overs with 2.75 economy rate, Mitchell Santner. Also, there was another man who picked three wickets on his hands, Ish Sodhi.

From the Match 14 of ICC T20 World 2016: The Captain, Shahid Afridi’s quickest 49 helped to reach the team score as 201. Whereas, this team also won the toss and the match. 🙂 All the opener played well and the bowler also, Amir and Afridi took two wickets each of them.

From the Match 17 of ICC T20 World 2016: The team NewZealand won the toss and also the match. Guptil, Williamson, and Munro are starts-up the match as the good average score. Mitchell McClenaghan and Santner controlled the opponents score.

From the Match 19 of ICC T20 World 2016: This time, India won the toss and also the match. Whereas, Afridi got out from the ball of new young Hardik Pandya. Others scored as an average runs nearly as 20 individually. This game was delayed due to the rain. So, the ICC allowed only for 18 overs for each. The team Pakistan scored only 118 by giving five wickets. The opponent chases this score on 15.5 over with the highest score of Virat Kohli‘s 55.