One of Today’s Releases movie, Nirmala Convent is the debut film for the Roshan Meka. The Popular child artists Shriya Sharma turn as a lead female role again in this movie. The Opening day reviews from the public audience as Glowing positive. The Akkineni Nagarjuna, Nimmagadda Prasad are the bank financiers for this film. The whole movie crew has happy about the public response in theaters. The movie had tons of exclusive in its pre-release. Some of Tollywood fans may know about that. Here, it is a place to know about Nirmala Convent Review, Rating, Story, Audience Response. 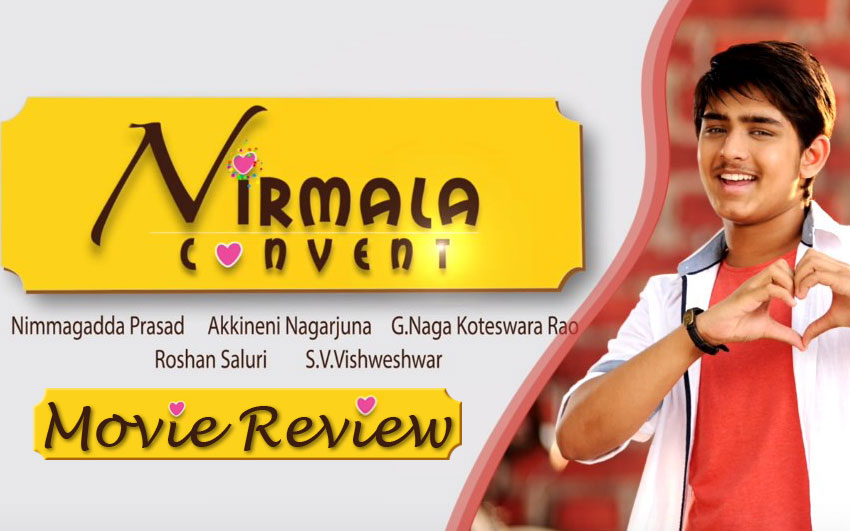 The key person in this film is the director G Naga Koteswara Rao and the Annapurna Film School students. The Nirmala Convent movie has released as per the scheduled date today on September 16, 2016. After 17 years of interval, the King Nagarjuna shared his vocal for a song in this film. He lastly sang a song for Seetharama Raju in 1999. The film finally on the screen under the banners of  Annapurna Studios and Matrix Team Works.

The debut young boy has made his first attempt as a Gold. He is getting kind words around the people of film lovers. Roshan Meka is the son of Actor Srikanth. His lovely young partner also shines on the screen along with cute smiles. It is G Naga Koteswara Rao’s directorial film, and he also handled his biggest job as good. S. V. Vishweshwar’s Cinematography lights over the extensive background and his lens proved his romantic skills over Photography.

On Music, the crew has launched the music box on last week on September 8. It consisted totally five tracks along with the AR Ameen’s Kotha Kotha Bhasha. The India music legend’s son has also introduced himself as first by this film. He is the son of AR Rahman. Ananta Sriram wrote four songs, and Chandrabose penned one for Nirmala Convent. The Background score and songs have composed by the debut music director Roshan Saluri. He is the son of famous South Indian composer Saluri Koteswara Rao.

Roshan Kanakala is the son of Rajiv Kanakala. It is a debut film in his cinema career. Also, the famous Television artist Prabhakar’s son Chandrahas have also acted in this movie as first.

A fascinating Romantic Story has featured by the line-ups of grand cinema artists. The movie script and the suitable pair of Roshan Meka and Shriya Sharma have made this film as memorable. The well experienced Nagarjuna has appeared in a special role, it made a highlight of this movie. The Nirmala Convent Rating is provided in the Rating box here below.

Rayarao Sriram @rayaraosreeram: Industry finds another promising actor in the form of #Roshan. He has a long way to go. He delivered impressive performance in debut film. Loved #Roshan & #Shriya in #NirmalaConvent. #Roshan should be careful so that he shines well. Review tomorrow! #Roshan delivers a good performance in the film. Roshan has a long way to go. Lovely start! #NirmalaConvent

RaJEsh @PowerStaRajesH: #NirmalaConvent loved it. A Good debut for #Roshan, n #Shriyasharma, #Roshan steal the show with their Performances ????????