After that, the party had various public meet, especially in Trichy. In that event, Kamal Haasan's party song was launched which was penned by himself. Followed by the various innovative steps which include Maiam Whistle App and instant growth of the party. 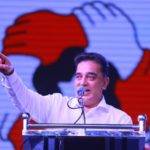 The Election Commission of India has accepted the party's registration. Then, they announced publicly to object against the registration of the MNM party if anyone like within 31st May 2018.

However, the Election commission has announced that there is no objection received against the part's registration. So, they asked the higher members of the party to visit the office on 20th June about discuss the registration of the party.

So, it is expected that the party will be announced party's official logo on June 20. Makkal Needhi Maiam president Kamal Haasan visited Bangalore on 3rd June at night to meet the Karnataka Chief Minister on 4th June to discuss on Cauvery issues.