Oman vs Netherlands, the seventh Qualifier match of ICC World T20 2016 will start at 15:00 IST (09:30 GMT) at HPCA Stadium, Dharamsala, India on March 11, 2015. It is the second match in this ICC T20 World Cup 2016 for both of the team. This is the first time, Oman and Netherlands will face each other on the International stage. Whereas, Oman beats Ireland on the 4th Match by two wickets with two balls remaining. But, Netherlands lost their game against with Bangladesh in the 3rd match by eight runs. So, Netherlands needs to paste the victory on the scoreboard.

Update: Due to Rain. The Match has been called Off. 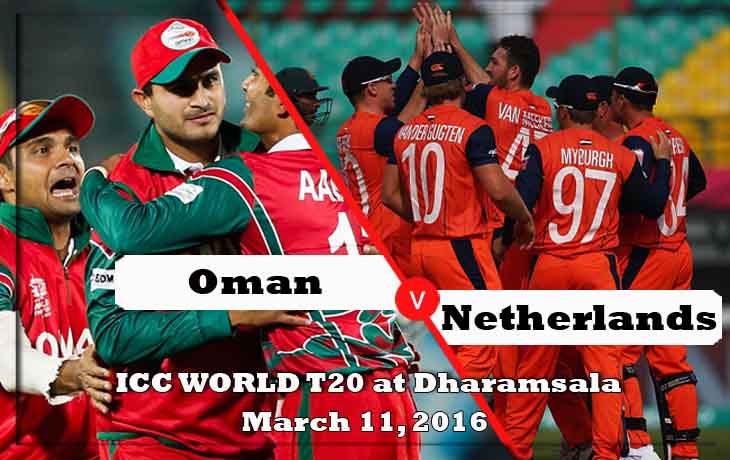 Oman, waiting for the excitement winning against with Netherlands as happened already with Irland. All the Opening batsman such as Zeeshan Maqsood scored 38 runs; Khawar Ali scored 34 runs and middle Amir Ali scored 32 runs out of 17 balls and made the victory. Munis Ansari took three wickets as a highest wicket taker of the match.

In the 3rd match of ICC World T20, Netherlands fails to chase the Bangladesh score, 153. But the team tried very hard to beat Bangladesh. So, Netherlands have the biggest strength to show their originality by upcoming games. Whereas, the captain of the team, Peter Borren scored the highest one on the previous match as 30 runs. Also, the opener Stephan Myburgh scored 29 runs. On bowling, Timm van der Gugten took three wickets with 5.25 economy rates.