In India, the film Oopiri released yesterday on both languages Telugu and Tamil as “Thozha.” The Oopiri / Thozha Movie Review got Positive feedback from all over the world Tamil and Telugu audience. The movie has been directed by Vamsi Paidipally and produced by Prasad V Potluri under the banner PVP Cinema. The music has composed by Gopi Sunder and background score also by him. One of the important role for a film is a Cinematography, it has been handled by PS Vinod. 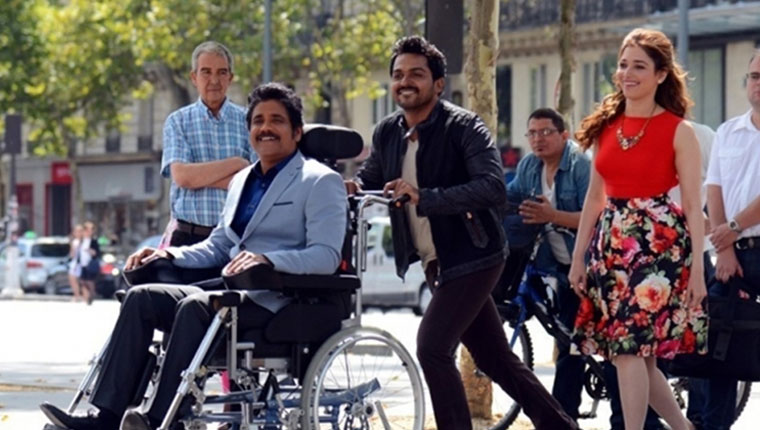 Some of we all known about this movie, Oopiri is a comedy drama and it is inspired by the french film named as “The Intouchables.”  An multi-billionaire, Nagarajuna (Vikram Aditya) played as a Character, who gave more importance for human relation when compare to money. He is an Tetraplegia and spend his whole life on his wheel chair after one of major accident he faced. Tamannaah bhatia is an assistant for his, she only appoints the another male lead role Karthi (Sreenu) as a Nagarajuna’s care taker. How the beautiful relationship is going there between millionaire and his care taker is a story of the film.

From the point of public audience: Screenplay is done well and the first half energetic level also makes as looking good. Karthi and Tamannah bhatia played their role as very perfect. If we look as on commerical view, it is at low. When compare to first half of the film, second half goes as slow. Otherwise it is a worth watchable Naga’s and Karthi’s film.

* These Are Expected Collections Only

So happy to hear positive talks about #Thozha #Oopiri watching tonight!! Thank you all for the big support!! Congrats to the entire team!!??