Watch Pakistan vs UAE Live Streaming Online now. This Asia Cup T20 2016 match-6 is the First match, were Pakistan and UAE will face each other on T20 after the One-day International in 2015. This match will begin on 19:00 IST, Monday at Shere Bangla National Stadium, Mirpur, Bangladesh. According to the last Asia Cup 2016 matches, both of the team looks like a little power, they need to charge their performance on batting. India Struggled with Pakistan's speed bowl and lost their top orders. Also, Sri Lanka and Bangladesh are registered their lowest total score in this Asia Cup against with UAE's bowling. So, both of the team seems as good on bowling. Viewers may expect some changes from this match.

Man of the Match: Shoaib Malik (63 Runs out of 49 Balls with 7 Fours and Three Sixes) 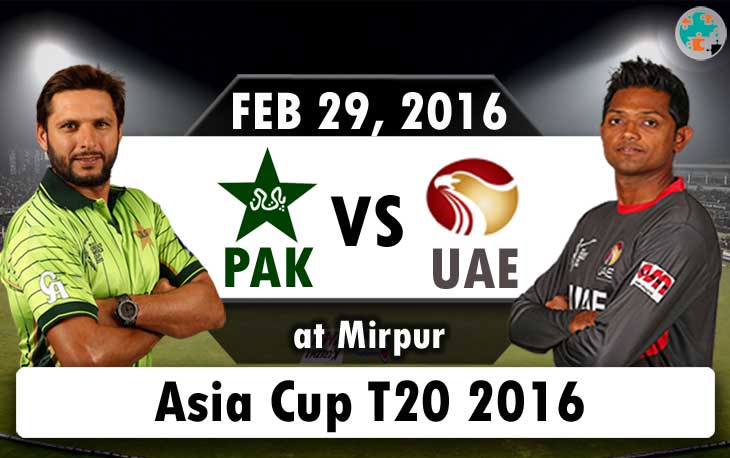 Shahid Afridi's team will be going to play against with qualifiers Emirates on this Monday, February 29, 2016. It is the second match for Pakistan.In the last game against with India, they were struggling to get big runs on the scoreboard. But they performed well on their bowling, especially an expected bowler, Mohammad Amir. Here, the first time after a long five years of the gap he played in this match and he proved again about his major bowl. All the Indian batsmen's are facing his balls with the red face. Because of his loss in their first match, they may change their playing 11 in this match.

On the other hand, the team, UAE trying their best to mark their place on the International Cricket stage. Here, it is third Asia Cup match for UAE. The team already played their games against with two big 11's as Sri Lanka and Bangladesh with the score of 115 and 82. It ‘s hard to face the balls on 150 kmph speed from the Pakistan bowlers such as Mohammad Sami and Wahab Riaz for the UAE batsman.

As of now, Pakistan played only one match in this Asia Cup against with India. From that point of view, the total team was collapsed under the bowling of Indians. The wicketkeeper of Pakistan team, Sarfraz Ahmed only scored a little big as 25 with three fours. But, the bowler doesn't forget their safe bowl and maintains their economy rates with 4.00. The special pacer of Pakistan, Mohammed Amir, took three wickets and just gave 18 runs. But, the swing specialist of Pakistan, Wahab Riaz gave 31 runs without any wickets.

The Former Pakistani right-arm fast bowler and present coach of Pakistan team, Waqar Younis Maitla said, “When we expect our players to do well, it's frankly at the Associate level… Pakistan has a fast-bowling attack that can run a team down really quickly.”

All is well about the UAE’s bowl, but their batting looks like an out of form. They need to focus on their batting line-ups. In last two Asia Cup matches, there was nothing to say about the highest individual scores for this team. Moreover, Swapnil Patil(37 runs) and Muhammad Usman(30 runs) are played in the middle order on against with Sri Lanka and Bangladesh. Even though their score didn't help for winning their previous games.

As we said already, they are capable of controlling the power of opponents' batting.  Ahmed Raza and Mohammad Naveed are bowled well and break the speed of opponents' total score in their previous matches against with Sri Lanka and Pakistan.

Notable key: UAE won the coin while toss on last two matches but,..!

Pakistan vs UAE Asia Cup Match 6 will be telecasted on