Panasonic Phone Fest: The brand Panasonic is launching the new model with the name of Panasonic Eluga Mark 2 in India through leading online e-commerce website, Flipkart. The India Twitter is filled with the hashtag of #PanasonicPhoneFest, Eluga, and other model names. Check the price list and specifications of the offered Panasonic smartphones. 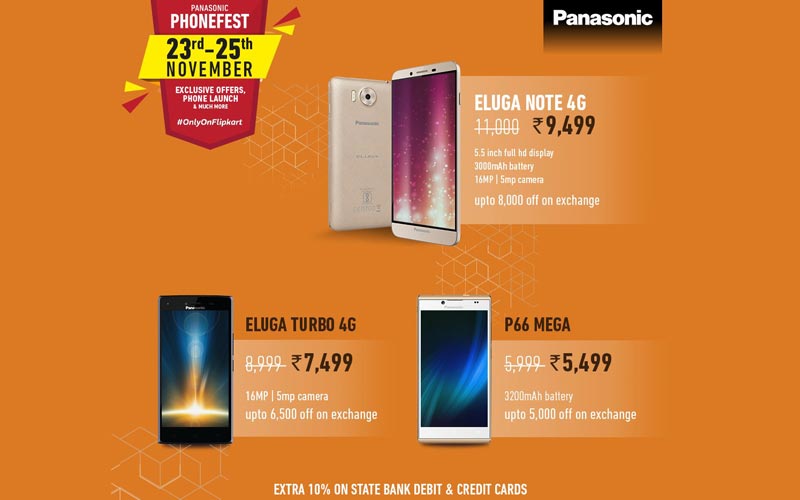 Panasonic Phone Fest Only in Flipkart

From 23rd November to 25th November, people in India can buy the available Panasonic smartphones on Flipkart for the offered price. The India’s leading e-commerce website has cut 24 percent as the maximum for the latest phones of Panasonic. The brand Panasonic had some number of models with positive reviews. Just check it here and grab it soon. Also, the user can reduce the extra 10 percent on these Panasonic days, if used the State Bank of India’s debit and credit cards.

Panasonic Eluga Mark 2: The original price of this smartphone is Rs 13,990 but, people can buy this now on the Panasonic Phone Fest at Rs 10,499. The Panasonic ELUGA Mark 2 is designed with the processor of Octa Core MediaTek 6753 64-bit with the power of 3GB RAM and 32GB internal storage memory. It had the battery power of 3000 mAh and Android Marshmallow 6 Operating System. The 5.5-inch HD 2.5D Curved IPS display had the resolution of 1280 x 720 Pixels. The Primary camera had the sensor of 16MP and secondary selfie camera had the power of 5MP.

Panasonic Eluga Note: The 5.5 inch Full HD Display smartphone is now available on Flipkart under the sale of Panasonic Phone Fest at Rs 9,499. The original box price is Rs 11,999 with the accessories of Handset, Battery, Charger, Data Cable, Premium Ear Phones, Protective Phone Case, Screen Guard, Warranty Card, and Quick Start Guide. The resolution of 1920 x 1080 pixel smartphone has made with the processor of 1.3GHz Octa Core Cortex A53. The RAM and ROM storage stats are same as the model of ELUGA Mark 2. It has the power of 16MP Primary Camera and 5MP Front-facing camera.

The Panasonic Phone Fest is offered for two different colors such as Marine Blue and Champagne Gold at Rs 7,499. Also, this model has another one option in color as Rose Gold. But, it is available on Flipkart at Rs 8,530. All the models have the same features and specifications. According to the storage, the Panasonic didn’t change any feature with the RAM and ROM. It is same as the previous smartphones which discussed above. But, the battery power is bit low when to compare with above two smartphones. It has made with the 2350 mAh Battery power. The 5-inch HD Display phone has the 13MP Primary Camera and 5MP Front-facing camera feature. Also, the resolution of this Eluga Turbo is low as 1280 x 720 Pixels when to compare with Eluga Note and Eluga Mark 2. Android Lollipop 5 is the operating system of this smartphone.

Panasonic P66 Mega: There are three colors of variants, but Flipkart offer is only available for Rose Gold, and Russet Brown. The Electronic Blue is available at Rs 6,622 and the other two models were at Rs 5,499. It has the 3200 mAh Li-Polymer Battery power with the 2GB RAM and 16GB internal storage. It allows up to  32GB of the microSD memory card. The 5-inch HD IPS display has the resolution of 1280 x 720 Pixels and the primary camera is 8 megapixel with LED flashlight and secondary camera is 5 megapixel.