The much-awaited trailer of Raees movie has released online by the superstar himself. A few days back released a video with making a statement “aa raha hu”. He also stated the release date of Raees Trailer at 11:00 AM on December 7, 2016. He also mentioned that he will be interacting with his fans live through the UFO Tech. Raees is one of the highly anticipated SRK upcoming movies as his last two movies “Dilwale” and “Fan” did not perform well at box office. Watch the Raees Trailer Here Below. 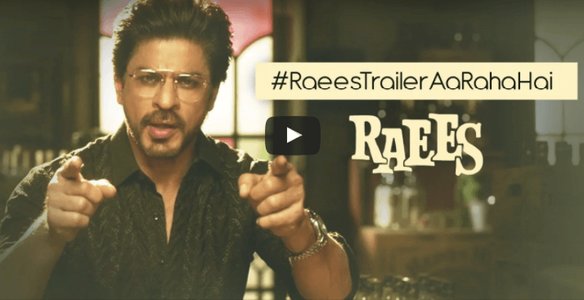 Shah Rukh’s Raees which was stated to release on 26th Jan 2016 is preponed and will see a release on 25th January. The movie will clash with Hrithik Roshan’s Kabil which will release on 25th Evening with Premier shows only. Check the Official Raees Twitter page for more latest update: @RaeesTheFilm
Tweets by RaeesTheFilm