Chennai: The ever lead actor of Kollywood and Superstar of Tamil Film Industry, Rajinikanth’s second daughter will get the divorce. Soundarya married the business person Ashwin in 2010; the married life will end soon. The Soundarya’s Official tweet confirmed it. She appointed as a brand Ambassador of AWBI. Some surroundings spread the rumor about Soundarya Divorce but at the end, she tweeted about that as true. 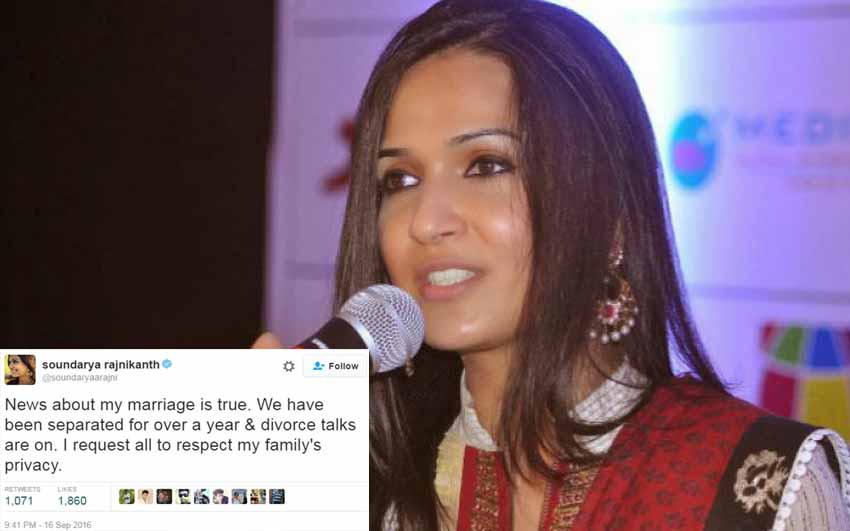 Even though, the talk about her divorce is the hot news of the Kollywood. She accepted as the ambassador of Animal Welfare Board of India. So, all the celebrities were greeting him on twitter. In between her “Than You” replies, she confirmed about her divorce.

The Vice Chairman of Animal Welfare Board of India, Dr. S. Chinny Krishna released the press release notice. In that he penned as “Ms. Soundarya will serve as a brand ambassador of AWBI to the film fraternity and work with them to ensure that their creativity in the films is not affected, while at the same time, protecting the welfare of animals used in the films and entertainment.”

She wrote as “News about my marriage is true. We have been separated for over a year and divorce talks are on. I request all to respect my family’s privacy.”

She is the founder of Ocher Picture Productions. Under her banner, she produced the Venkat Prabhu’s Tamil Comedy film., Goa in 2010. She is the director of his Father’s and India’s first motion capture 3D Tamil film “Kochadaiiyaan.”

Early, she worked along with his father on “Baba.” She is the professional graphical designers. So, her father allowed to direct him. She also worked along with the Sankar’s directorial blockbuster hit movie “Shivaji” in 2007.

She wrote a long reply in the tiny text Twitter to Actor Dhanush as “Brother-in-law ? thanks for your unconditional support always ! #MyFamilyIsTheBest #RockSolid.”

So, the Ashwin Ramkumar-Soundarya Divorce talk is initiated now in their family as per the official report. Also, she mentioned that to respect their family personals and they need privacy.