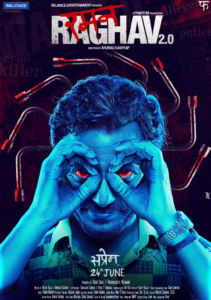 Raman Raghav 2.0 is an upcoming Indian thriller directed by Anurag Kashyap and is Produced by Anurag Kashyap, Vikas Bahl, Vikramaditya Motwane and Madhu Mantena. The script for the movie is penned by Anurag Kashyap himself.The shooting of the movie was wrapped up in the month of November 2015 and the makers are planning for a release on June 24, 2016. The movie is based on the notorious serial killer named Raman Raghav who operated in Mumbai during the mid-1960s. The character of Raman is played by Nawazuddin Siddiqui and Vicky Kaushal plays the role of a police officer in the film.

This teaser shows a man inquiring to an auto rickshaw driver about his phone in the night. He then finds a man with a hammer coming towards them. Watch more to enjoy the thrill.

Anurag Kashyap’s directorial Raman Raghav 2.0 will premiere at The Directors’ Fortnight At Cannes this Year.

Raman Raghav 2.0 is a psychological thriller, set to hit silver screens on 24th June with its premier at Cannes Festival between May 11 to May 22, 2016.

Visit us back here for more updates on Bollywood.