Royal Challengers Bangalore vs Gujarat Lions, RCB vs GL Live Score Updates: The IPL 2016 Match 44 will be held at the location of M. Chinnaswamy Stadium, Bengaluru for RCB vs GL. Scroll down to get Full ScoreCard and Highlights of the RCB vs GL match.

Gujarat Lions Won the Toss and Chose to Bowl First 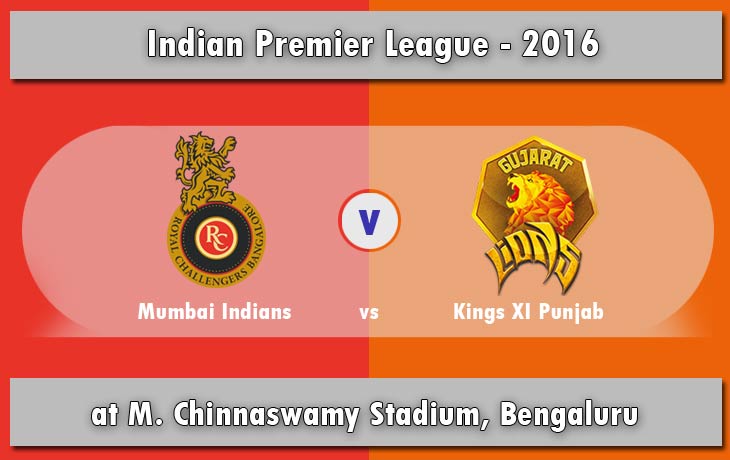 It is Eleventh Match for Royal Challengers Bangalore (RCB) and Twelfth Match for Gujarat Lions (GL). Both of the team have their equally balanced level on batting and bowling.

As per today’s report, the team RCB wins four matches out of their ten and secured Eight Points. RCB registered their lowest score on their last match against with defending champions Mumbai Indians. The team scored 151 for 4 wickets. The team must be win all other remaining matches to get into the playoff. Even, if they loss any one of their remaining matches mean, then they couldn’t able to get into this IPL 2016 playoff.

Yuzvendra Chahal said about the Bangaluru M. Chinnaswamy Stadium’s pitch as ” the pitches in Bengaluru had become a tad slow, and he was hopeful that the bowlers would now join the party.”

Suresh Raina’s GL wins Seven Matches out of their Eleven Matches and secured 14 points as per today’s date before on 14th May 2016 Match. Even, they lost their recently played three matches out off four played. The team will play today’s Match without their Captain Suresh Raina as first time, he went to his home under paternity leave. He promoted as a father for his new born daughter. Brendon McCullum may be today’s captain for Lions against with RCB’s team.

Dwayne Bravo, Praveen Kumar and Dhawal Kulkarni are the star bowler of Gujarat Lions. But the team need to concentrate on their Batting performance.