Royal Challengers Bangalore vs Kolkata Knight Riders, RCB vs KKR Live Score Updates: The 30th IPL 2016 Match will be held at M. Chinnaswamy Stadium, Bengaluru for RCB vs KKR on Monday Evening 08:00 PM Indian Standard Time. Scroll down to get Full ScoreCard and Highlights of the RCB vs KKR match.

Man of the Match is Andre Russell (Kolkata Knight Riders) 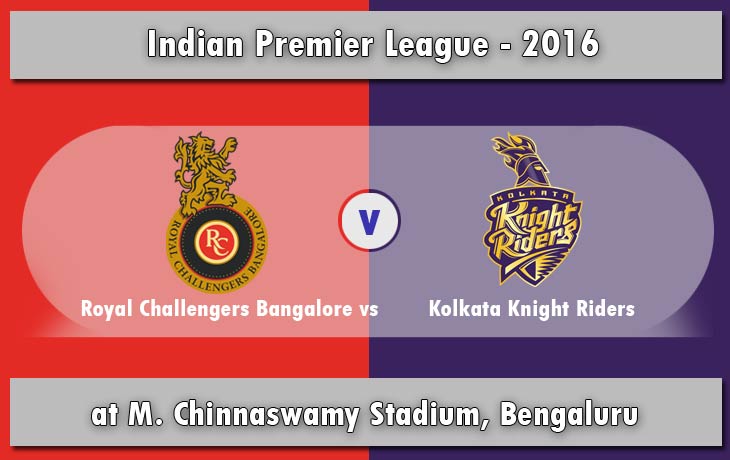 It is the First Time clash between each team on this IPL 2016. RCB played six Matches on this IPL 2016 tournament. KKR played seven Matches in this Ninth series of Indian Premier League.

Royal Challengers Bangalore has been recorded their poor bowling economy rates on their overall Matches on this six IPL Matches. The team didn’t found their best bowling combination as of Now.

The team were managed their batting with the openers itself such as Virat Kohli and AB de Villiers. Both are firing consecutively. The 2016 Top most T20 player is the skipper of this team and his partner, AB de Villiers scored more then 300 runs in this IPL 2016.

Kolkata Knight Riders have played Seven Matches with the winning of Four. The team lost their Matches against with the Mumbai Indians and Delhi Daredevils.

If the openers of KKR might performed well, as the skipper Gambhir scored well runs on maximum of this IPL.  Also, the middle line-up’s also played their Matches as good. Andre Russell and Yusuf Pathan were performed well.