Sunrisers Hyderabad won the TOSS and Chose to BOWL First

*Full ScoreCard and Highlights of RCB vs SRH is Here 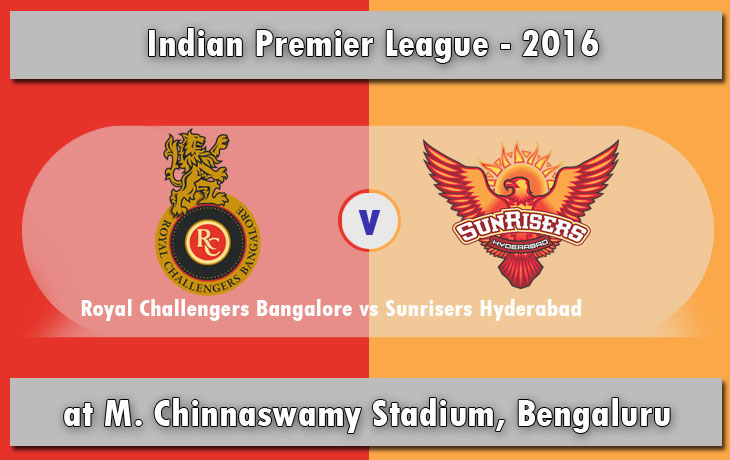 The team, Royal Challengers Bangalore was shortly called as RCB. Which contains most important players as the top batting order. On the other hand, Sunrisers Hyderabad was shortly called as SRH. Which is packed with little much of influential players on batting and the team have most experience seamer, Ashish Nehra. Both of the team wins three matches on the head to head each other in the series of 8 IPL.

The skipper, Virat Kohli and quickest run scorer, Shane Watson are the named players in this tournament and also on the previous series of game that included ICC World T20. The man who has a two important jobs in the RCB as a wicketkeeper and top-order lineup: AB de Villiers, he has a strike rate against with SunRisers Hyderabad as 175.49 in the IPL matches.

And we need to note the name called Chris Gayle who has all the following titles on his pockets such as highest individual scorer, Most Centuries, Most Sixes, Lots of Man of the Match shields, Quickest Century and much more. He also walks into the ground as a third of the fourth batsman. Also, the team has good bowlers such as Mitchell Starc, Adam Milne, Harshal Patel. But at present it shows as a little much of weakness due to the absence of Mitchell Starc and Adam Milne. Yuzvendra Chahal is a player for RCB as a spinner.

The Captain, David Warner, who will be going to lead the team to the winning status in today’s match. And the team has India’s opening batsman, Shikhar Dhawan as same as on opener of SRH. Kane Williamson will make an extra power for batting lineup of the team. Ashish Nehra and Mustafizur Rahman are the two last bowlers as a pillar for the team to break the opponents score.

Ashish Nehra, who played 17 of T20 matches in this year and picked at least a wicket in all the games except Two. Eoin Morgan and Bhuvneshwar Kumar are also taking their place on the bowling. Here is a question for all of us, how the team going to manage against the continuous hits of RCB?

The harder your train, the better you perform. Let's go, #OrangeArmy Let's give it all on the field today. pic.twitter.com/cMLjk0Nrtc