The Real Madrid beats Atletico Madrid in three goals difference. All the three goals are done by the world’s greatest soccer Cristiano Ronaldo. He won another Champions League game with his hat-trick goals. The Ronaldo’s opponent, who played their semi-final UEFA Champions League to close in on a third final in four years.

The Real Madrid took their game win over Atletico Madrid by the final result score of 3-0 at the Bernabeu in the first leg of semifinal on Tuesday night. Hence the Ronaldo is the top scorer in the history of the Champions League, he scored 103 goals in the European games. He scored 100 goals in the quarterfinal win over Bayern Munich.

Cristiano Ronaldo made his first goal against Atletico at the 10th minute as early game. Also, the third and last goal has made at the end five minutes from match time. The second goal of the match has created through the second half. His hat-trick goals have made with only 50 touches of the ball compared with the midfielder Toni Kroos’ 123.

First Goal: Cristiano Ronaldo from the centre of the box to the centre of the goal. Assisted by Casemiro following a corner. When Sergio Ramos’ cross came in for the 1st goal, but the ball never reached him, instead of the ball out to the Casemiro and then Ronaldo‘s finish.

Second Goal: Cristiano Ronaldo right footed shot from the centre of the box to the top left corner. The 2nd goal has recorded when the Karim Benzema held off Diego Godin and Filipe Luis’ follow-up clearance bounced up to Ronaldo. 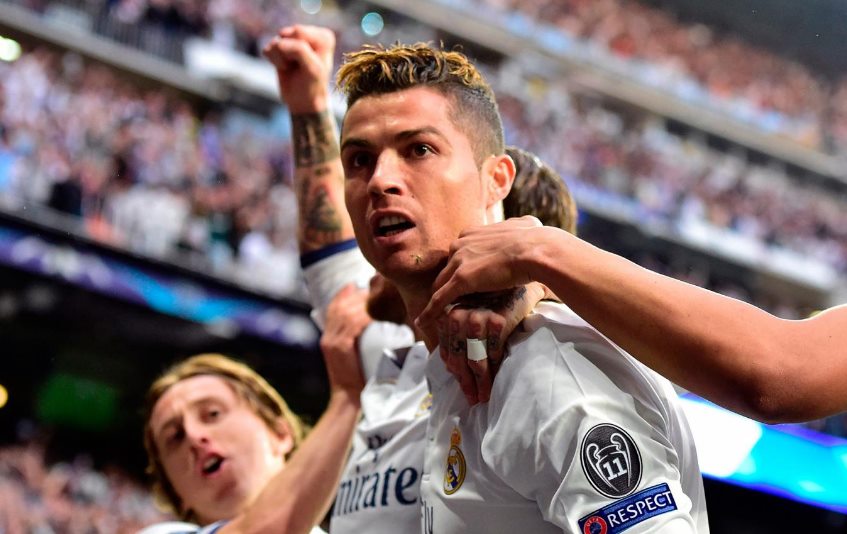 Man of the Match – Cristiano Ronaldo (Real Madrid). After his second hat-trick of this season, the officials had only one choice for man of the match against Atletico Madrid.

Atletico Madrid manager Diego Simeone said that “We need to forget about this game.”

Real Madrid manager Zinedine Zidane said that “I am happy with what I am doing here and with the players, we played a great game. We can hurt any side with our weapons.”

The Past (History): Real Madrid having their winning finals of Champions League on 2014 and 2016. The team played up to 2015 quarter-final.

The above-provided video is not official. The source from the unknown YouTube channel. The next Real Madrid’s first ball kick-off is set against Granada on Saturday at 07:45 pm BST. The Atletico Madrid facing the host Eibar on the same day at 03:15 pm BST. After the game of Champions League semifinals first leg, the Real Madrid spotted at the second position with the 81 points by 34 games. The Atletico placed at the third position with 71 points by played 35 games.