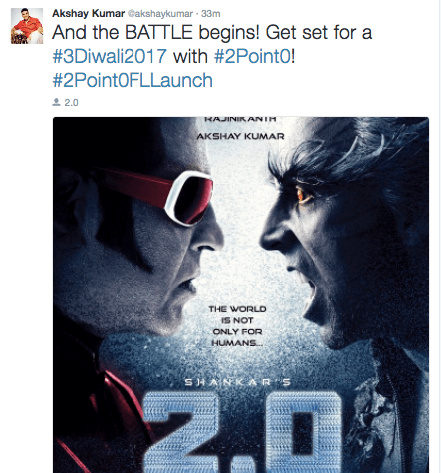 Akshay Kumar has announced the release date of Shankar’s 2.0/Robot 2.0/ Enthiran 2.0 through his twitter account. The Action hero has tweeted “And the BATTLE begins! Get set for a #3Diwali2017 with #2Point0! #2Point0FLLaunch“.

UPDATE: Now, it is postponed to January 2018 on Republic Day Week end. Because of the Robot / Enthiran / 2.0 postponement, actor Vijay’s Mersal will be releasing on Diwali 2017. Mersal is the 100th film of the production company, Sri Thenandal Limited. On August 20th, the cast and crew of Mersal attended the Tamil cinema’s grand audio launch ever in recent days. The Music director AR Rahman performed live on stage.

Jeyram, the scripter of Enthiran 2.0 while speaking to the media said the movie is more commercial, Technical, Action while having 20 minutes Drama part.

Follow us for more information about Enthiran 2.0, and other Entertainment news. Press Ctrl+D and Bookmark us to stay updated. Share your review as comments down.