Rising Pune Supergiants vs Mumbai Indians, RPS vs MI Live Score Updates: MS Dhoni’s Riding pune Supergiants will clash with the Rohit Sharma’s Mumbai Indians at the Home ground of Dhoni’s team, MCA International Stadium, Pune on First Sunday of May 2016 (May 1, 2016) 08:00 PM Indian Standard Time. Scroll down to get Full ScoreCard and Highlights of the RPS vs MI match.

Mumbai Indians Won the Toss and Chose to Bowl First 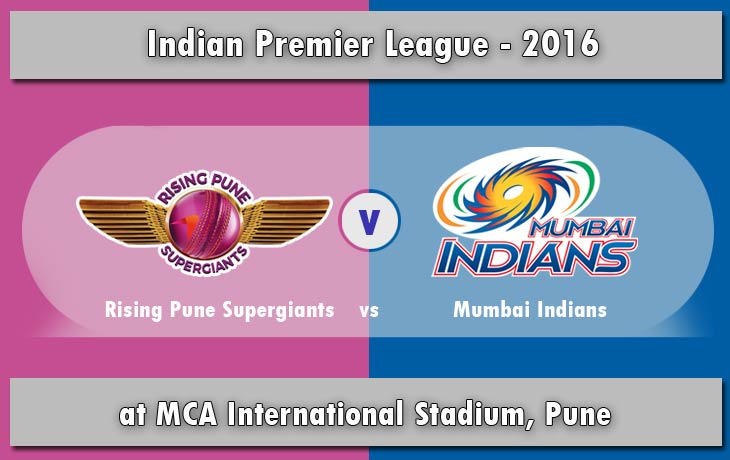 Dhoni’s team getting bottom of the Points Table on this IPL 2016. There weakness made their teams continuous fail. It is 29th Match of this IPL tournament. Nearly, half of the IPL 2016 has finished by tomorrows Match. There was totally 60 Matches on this IPL 2016 Tournament.

The Team performed well on their batting line-up especially, Ajinkya Rahane made his quality as high by his continuous run scores.

The expected IPL 2015 Champion, Mumbai Indians also hold their position at the bottom of the IPL 2016 Points Table. The team wins their Four Matches out off their Eight Matches. So, they got Eight Points and locate at the Fifth position as per before today’s Matches.

On the last Match against with KKR, Tim Southee (2 Wickets by giving just 38), Mitchell McClenaghan, Harbhajan Singh, Hardik Pandya, Krunal Pandya are took wickets and made their wining Match.