This is the second match for both sides, and it is the home match of Rajasthan Royals. The home team has won ten matches against Delhi Daredevils in 16 matches. While at the home of Royals in Jaipur, they won three from four.

RR winning chance: This is the first home match for Rajasthan Royals in this tournament. Also, they will play their home game at their own venue after a long time. So, it is the special match for the team and fans.

In their last game against Sunrisers Hyderabad was ended with the result of the loss. They may try to enhance their bowling lineup and also their batting power to open their points from the first home match.

DD winning chance: After the first match losing result, the team set to face Rajasthan Royals in their first away game. The fans of Daredevils felt bad about their play at their home ground against SunRisers Hyderabad.

Because of the KXIP’s opening batting by KL Rahul, the team reached this destination easily, he scored fastest 50 in 16 balls. So, it is difficult for RR to face with their same performance which they gave in their last match. In this point of view, DD can win this match.

Update: Delhi Daredevils have won the toss and have opted to field (Bowl) 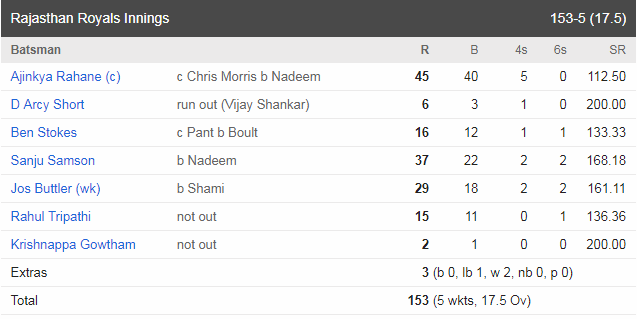 RR & DD Key Batsmen: D’Arcy Short, Sanju Samson, Ben Stokes are the important player who needs to express their batting performance as well. Stokes who is the most expensive player of this tournament while he was signed for the big price at the IPL Player Auction 2018. In the Delhi Daredevils line-up, Colin Munro and Rishabh Pant are in the top order who important batsmen of the team. Munro and Rishabh Pant having best batting strike-rate. In this match, Glenn Maxwell has joined the team. So, the expectation increased high.

RR & DD Key Bowlers: It looks that Rajasthan Royals bowling side are not in a stable form. Jaydev Unadkat needs to focus on to take more wickets while Ben Stokes also not fit and form. In their last match against SRH, they only took only one wicket.

Rajasthan Royals Next Match: Royals will play at away fixture in their next against Royal Challengers Bangalore and the match scheduled to begin on 4 pm at 15th April.

Delhi Daredevils Next Match: Daredevils also set to play their next game in away fixtures against to Mumbai Indians at Wankhede Stadium on April 14 at 4 pm.