IPL score 2018 RR vs KKR scorecard: Kolkata Knight Riders have won the toss and have opted to field. So, the skipper of Rajasthan Royals Rahane and D Arcy started their batting as openers of the team. Both of them have played well and scored totally 80 runs in 62 balls. In the over of Nitish Rana, they both got out. Later, there were no players scored big individual runs. Finally, the team scored 160 runs by giving eight wickets in 20 overs.

Sunil Narine is back again as an opener for the team, who didn’t perform well in last two matches on batting. In this game, he scored 35 runs in 25 balls with six and five fours. Chris Lynn, who got the duck out! Robin Uthappa missed his half-century by two runs. Nitish Rana and the captain Dinesh Karthik have correctly managed the middle order lineup by scoring 77 runs. So, the team won the game at 18.5th over by 7 wickets remaining. 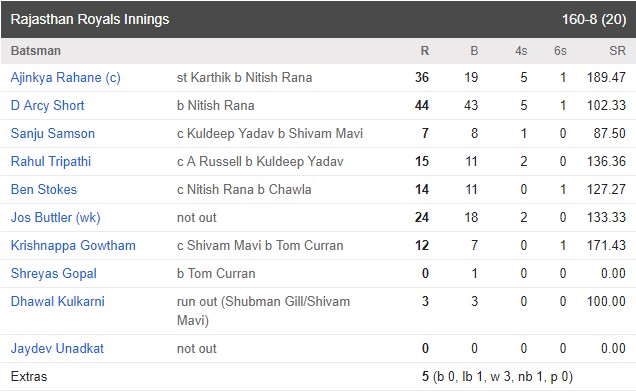 Before RR vs KKR Match Analysis

After two back-to-back wins for Rajasthan Royals in opening three matches of this season. They will play their second home match on 18th April, Wednesday at Jaipur. DK’s Knight players will play their fifth game of this tournament today. They won two games off four played.

This is the 15th IPL match of this season 11 between Rajasthan Royals vs Kolkata Knight Riders. The game set to be played at Sawai Mansingh Stadium in Jaipur. As usual, the game will begin on 8 pm IST local time.

RR winning chance: This is the home match for Rajasthan Royals, they have won their last nine IPL matches at this venue in Jaipur. Also, they had nine winning matches against KKR by playing 15 matches. After a loss with Sunrisers Hyderabad, they won next two matches with Daredevils and Challengers. Hope, they will play this game in the same spirit to win this match.

KKR winning chance: Lastly, they won a game against Daredevils most-recently after losing two games. Important players of the team are yet to express their real talent. Because of the away fixture, they should play well to become strong when to compare with other teams. With the same playing 11, Knight club will win this match.

RR vs KKR Key Batsmen: Sanju Samson is one of the finest players in the Rajasthan Royals who scored 178 runs in the last three matches. In that, he scored 49 (with SRH), 37 (with DD) & 92* (with RCB). He is the one who played well in all past three matches. The skipper Ajinkya Rahane also contributed his decent scores in two matches. This is not enough for the team, they need at least one more constant batsman.

Nitish Rana scored 127 runs so far in this season by playing three matches. In the last match against DD, he scored 59 runs and it saved the team from the loss. Sunil Narine had a good play only in the first game over RCB, then he lost his wickets twice quickly. DK and Russell are managing from the middle order.

RR vs KKR Key Bowlers: From KKR, Sunil Narine needs to control the total score of the opponent. Like the same, Shreyas Gopal for RR should control the batting of KKR. Because the boundaries at the Sawai Mansingh Stadium are big. Both of these two spinners have the best record in past matches.