Sambit Patra, who is one of the spokespersons of the Bharatiya Janata Party. He tweeted an 18-second edited video to portray that Delhi Chief Minister Arvind Kejriwal supported the recently passed Farm bills. The caption of the video reads, “Calculating the benefits of all three farm bills… Sir” According to fact-checking websites and few social media users, that 18 seconds video clip was taken from an interview and edited to make the fake claim the Delhi Chief Minister Kejriwal praised the bills. He actually criticises the farm bills in the real interview.

In the edited video clip, CM Kejriwal said, “Your land, MSP and mandis won’t be taken away. The farmer can now sell his crop anywhere in the country. Now, the farmer will get good prices, he can sell anywhere outside the mandi. Mr. Dilip, it would be the biggest revolutionary step in the field of agriculture in the last 70 years.”

This edited video clip goes viral among the farmers protest at the borders of Delhi from Punjab, Haryana and Western Uttar Pradesh, who camping since 26th November 2020. The farmers are protesting by demanding the repeal of three farm bills passed by the central government. 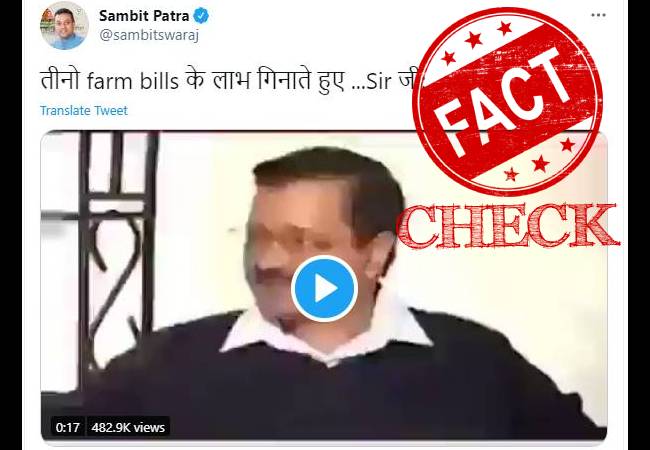 For this false video clip, there are 18.2 thousand retweets, 2.2 thousand quote tweets and 46.6 thousand likes at the time of writing.

Also, the BJP worker Vikash Preetam Sinha uploaded the same video on his official microblogging handle with the caption of “If lies, deceit, cheating, manipulation and slyness had a face, it would be exactly this.” The DD News journalist Ashok Srivastav also retweeted this tweet. 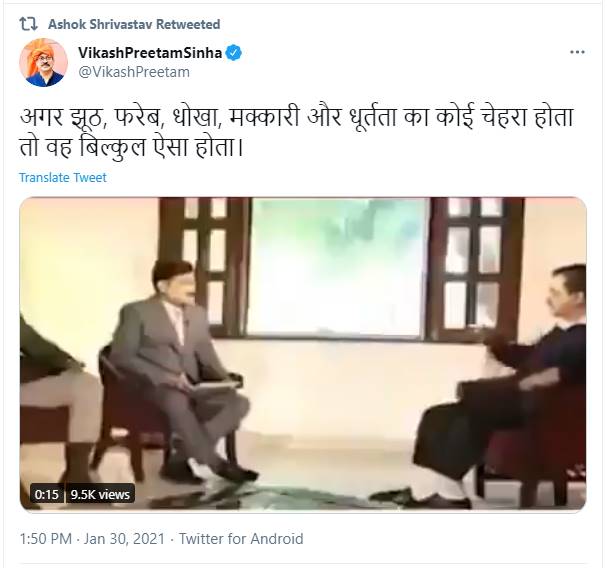 The same video and misinformation went viral on Facebook with several captions. Few other verified handles have shared the video that claiming Delhi CM Kejriwal spoke in support of the central governments' new agricultural laws.

Zee Punjab Haryana Himachal aired the interview on 15th January 2021, where Kejriwal was being interviewed by the editor of the channel Dilip Tiwari and his colleague Jagdeep Sandhu. The Delhi CM cites examples and arguments made by the BJP leaders and the central government to support the farm bills. He can be heard speaking against the farm bills.

The common social media users have found the real video and pointed out that this was an edited video clip.

The 18-second edited video has been made by putting together several smaller clips from different points in this original video.