Aspiring-politician and businessman Clive Palmer released a 2-minute ad attacking China and accusing the Western Australia Labor Government of “allowing the Chinese to undertake a clandestine takeover of Australia” via ports and airports.  But many are now calling him out for scaremongering.

The incendiary ad, which recently began airing on television across the country, features Palmer stating: “At 80km south of Karratha, in the existing Karratha Airport in the Pilbara, the Chinese Communist government-owned companies, with the help of the Labor Party, built and constructed a private jet airport.”

However, these odd claims simply do not add up. The busiest airport in WA outside of Perth, the Karratha airport is owned by the City of Karratha and has daily flights in and out of Perth by Qantas and Virgin Australia, with one daily flight carrying miners and mining workers to their jobs at Solomon Hub, an iron ore mine fully owned by Australian miner Fortescue Metals Group. 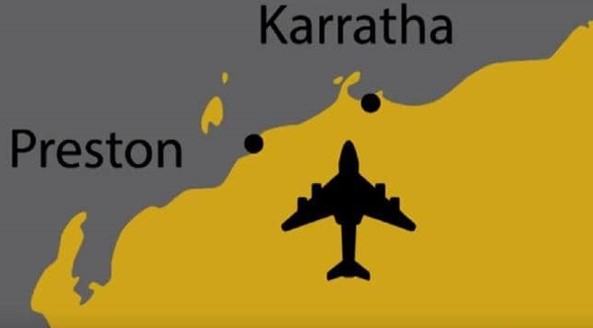 The airport saw a $35m terminal upgrade in September 2015, paid for by the city of Karratha. Karratha Mayor Peter Long unveiled the new terminal building, saying; “We’ve now got our team talking to all the various airlines… We think business tourism could be one of our first opportunities.” Why Palmer claims China owns or runs the airport remains unclear, since as of today, the Karratha Airport has only domestic flights and is not an international airport, despite high hopes from mayor Long.

Many now think Palmer confused the city-owned Karratha Airport, 15km from town, with a small mining landing strip 90km from Karratha and near the Port of Cape Preston. The landing strip serves to fly miners and employees in and out of the Sino Iron mine. Such private airstrips for large mines are commonplace as explained by Dr Ron Huisken of the Strategic and Defence Studies Centre at Australian National University, who labelled the conspiracy video “tacky scaremongering.”

Palmer should know this, as he is actually the land owner at the Chinese-operated project and was the beneficiary of nearly $200m in mining royalty payments from it in 2017 alone. His claims that the Australian government allowed the Chinese (in this case the conglomerate CITIC) to build airfields in Western Australia is disingenuous, as he is the one who owns the land and allowed the landing strip to be built in the first place.

This isn’t the first time Palmer has attached local WA airports, claiming they are owned by the Chinese.

The Merredin airport, right outside the town of Merredin and 260 kilometres from Perth, has recently made headlines as Palmer “blasted the WA Government for allowing Chinese control of Australian airports” in a statement by his United Australia Party. But the airfield, which has been leased by China Southern Airlines and Canadian Aviation Electronics Ltd. for the China Southern West Australian Flying College since 1993, continuously allows landings and takeoffs and has seen massive development, solely funded by the Chinese company. It is also 50% held by Canadian company CAE, which does not include Chinese ownership.

While some, like prominent local businessman Dick Smith, are upset by the Chinese presence, many in the Merredin area tell a different tale “We’d sell it for a dollar, as long as it still remained a public airfield and no one was charged landing fees to use it,” said Merredin councillor Martin Morris. “It was a very basic airfield, two gravel cross airstrips. Now it’s a multimillion dollar all weather airfield that was funded by somebody else that anybody can use anytime.”  Morris added, “That business has been here longer than a lot of businesses in the main street so it’s part of our DNA might you say…If anything, Merredin should be held up as being leaders to get multinational investment into country Western Australia.”  Shire president Ken Hooper is also a vocal supporter of the airfield. “It’s quite important for our economy here,” he stated.

Privately-owned airfields do seem to be quite common around the country. BHP owns several airports near the Yandi mine and Mining Area C in Pilbara. Even Melbourne’s airport is now owned by Australia Pacific Airports (APAC), a privately-owned company that won a bid for a 50-year lease in 1997 with an option for a further 49 years. Major investors in this entity include the British Airports Authority, AMP, Morgan Grenfall Australia, and Hastings Funds. Much like in Merredin, this proved financially wise for Melbourne.  Aeronautical performance data show that there has been steady year-on-year growth in revenue stream; over the entire period (1997-2013), aeronautical revenues grew by 344% while passenger numbers grew more modestly at 119% and aircraft movements by 41%.  In Queensland, airport investors include Schipol Airport (Amsterdam) and various funds managed by private sector entities such as Prudential, ANZ and Norwich Union (UK).

This isn’t coincidental.  Management Australian law permits up to 49% of airports and airfields to be operated by foreign, non-Australian companies under Airport Act 1996 s40.

Palmer’s anti-China discourse puts the residents of Karratha, the Merredin community and economy and the miners and workers of such mining projects as Sino Iron at huge risk. Sino Iron is already a cause for concern for many, including Premier Mark McGowan. Palmer has relentlessly and personally attacked McGowan, who has been trying to save some 3000 mining jobs as Palmer refuses to settle with Chinese giant CITIC,  which runs the projects. In another effort to disrupt normal proceedings at Sino Iron, Palmer recently moved his biggest companies, including Mineralogy, to New Zealand and then to Singapore.

Some are already noticing the double standard in Palmer’s rhetoric.  While seemingly anti-China, Palmer has been in business with CITIC and the PRC for decades, amassing a large fortune. He personally owns the land on which CITIC mines ore, and has been involved in creating the very landing strip near Cape Preston which he now attacks in his ads.

Many believe that electoral politics and business interests – not national security concerns – are driving Palmer’s recent attack ads.  In the short term, it is not likely to have any effect on the airport, but it may serve as an additional nail in the coffin of Sino Iron, one of Australia’s most important natural resource projects and a large employer in WA.

What to Know About Plumbing Home Services Before Calling A Plumber

What to Know About Plumbing Home Services Before Calling A Plumber