Looking for South Africa vs West Indies T20 World Cup Live Score Updates and Live Streaming Online? Read below to get Live score updates, and also Playing 11 of both the teams. The First T20 International hundred was scored by Chris Gayle against with SouthAfrica in 2007. It is another one for WestIndies to play against South Africa at Vidarbha Cricket Association Stadium, Jamtha, Nagpur on 19:30 IST. 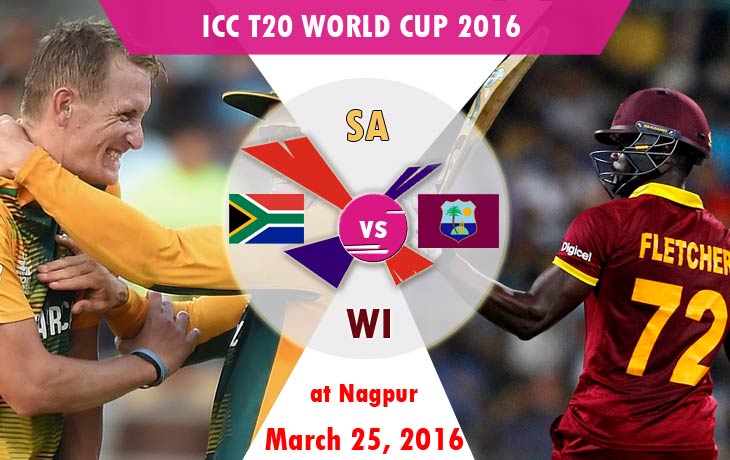 South Africa’s one of best batting player; JP Duminy may be an absence of this match because of his injury. So the team may replace with other players such as Rilee Rossouw and Farhaan Behardien. WestIndies consecutive wins make them as the strongest group, and South Africa’s zig-zag wins make the doubt for the audience.

From the 20th Match of ICC T20 World Cup 2016, South Africa faced the team Afghanistan and won the match by De Kock and Du Plessis individual score as 45 and 41. Apart from this AB de Villiers score 64 make the total as 209. The Player of the match, Morris picked Four wickets by just giving 27 runs.

West Indies won the toss and the game also against with Asian island, SriLanka. WI bowlers controlled the opponents runs and stopped with 122. Especially, Samuel Badree picked three wickets with the economy rate as 3.00. On batting, Chris Gayle didn’t land on the ground in this match But, we expect on today match. The opener, Andre Fletcher hit 84 runs with Five sixes and six fours. His score itself makes the team as WIN.