Sunrisers Hyderabad vs Rising Pune Supergiants, SRH vs RPS Live Score Updates: The 22nd Match of this IPL 2016 will be begins with the clash between SRH vs RPS at Rajiv Gandhi International Cricket Stadium, Hyderabad on 08:00 PM of tonight (April 26, 2016). Scroll down to get Full ScoreCard and Highlights of the SRH vs RPS match. 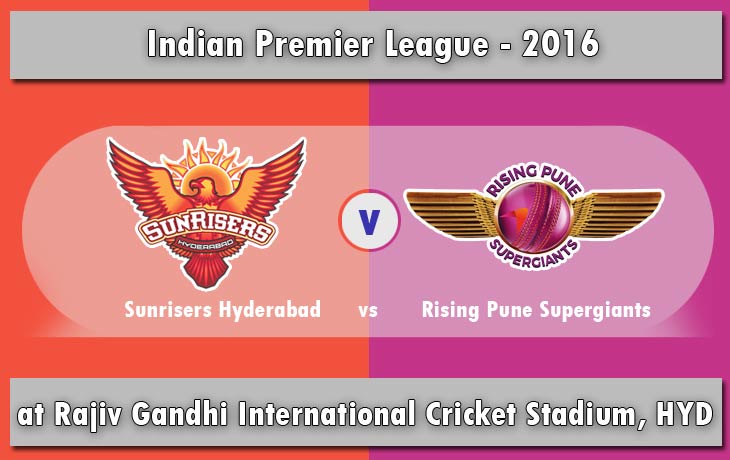 Both of the team played their IPL 2016 as Five Matches each on this Tournament. How ever, SRH wins three Matches and stands on Fourth position on the points table and the RPS only beats the defending Champion MI in the Match 1 and stands on the seventh position of the Points Table.

Sunrisers Hyderabad started their IPL 2016 against with the Virat Kohli’s Royal Challengers Bangalore and the team fails to beat their opponent. SRH scored only 182 in their chase to lose by 45 runs. Their Second Match was also fail against with the hands of Kolkata Knight Riders by an 8 wicket. But after their Second match of the IPL T20, the team, SRH have been dominant, shining with their wins 7, 10 and 5 wickets in their last three Matches.

The Captain and the opener of SRH, David Warner performed well on his last few matches with the strike rate of 168 with the scores of last three matches as 59, 74* and 90*.

Bhuvneshwar Kumar and Mustafizur Rahman made the SRH bowling department as ever good on this tournament.

Rising Pune Supergiants have failed to win their last four matches on this series. It was ever good chance for their win against their last IPL T20 (Match 20) with Kolkata Knight Riders. The bowlers failed to bowl properly on the last few overs even though they picked few wickets at the end and also the fielders didn’t performed well on that day.

The opening batsman, Ajinkya Rahane played well and made their half-centuries on his last two consecutive matches. MS Dhoni shows his ever unforgettable performance on his special over at the end.