IPL 2018 Score SRH vs RR: This is SunRisers’ home game, they take on the team who returned to IPL 11. They facing IPL inaugural final match winner. In that match, they beat Chennai Super Kings at DY Patil Stadium. Later, they can’t able to win any IPL title until IPL 10. Like CSK, they like to win their first game to celebrate their return to IPL tournament.

After three matches of IPL on last two days of the weekend, this is the first game on Monday of this season. Sunrisers Hyderabad will play against Rajasthan Royals on the third day of IPL 11 at 8 pm (2:30 pm GMT). As early said that this is SRH’s home game, so the match set to play at Rajiv Gandhi International Cricket Stadium in Hyderabad.

In the IPL 10, today’s host entered the playoffs and also, can see them at fourth place in the points table. But, they fell out from the tournament by losing a match in Eliminator. The fans are looking the same spirit in this season too from the players of SRH.

SRH winning chance: They will play this season without their successful captain David Warner, he is the one in two that the team retained at auction. Another important player of the team, the hot bowler of all IPL season Bhuvneshwar Kumar. Also, they used the RTM card to re-sign Shikhar Dhawan, Deepak Hooda, and Rashid Khan. Hope, SRH will win this match.

Update: Sunrisers Hyderabad have won the toss and have opted to field 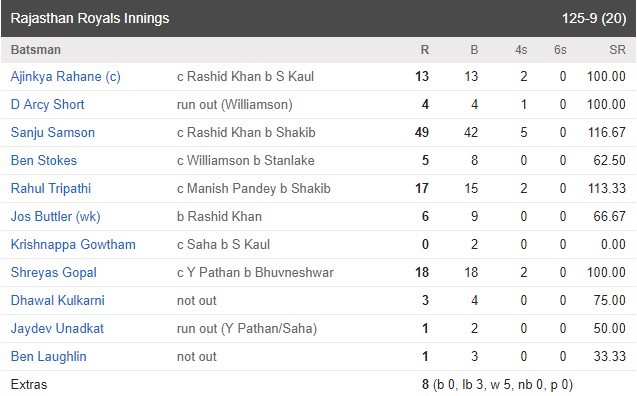 RR winning Chance: They come back again after two years of gap and faced big disappointment in their last minute. Like the SRH, Rajasthan Royals lost their captain Steve Smith, who also banned by BCCI to play IPL. So, the team will lead by Ajinkya Rahane in this season. Shane Warne is back again to his first IPL team, he was the captain of this team in 2008. First captain, who won the IPL 1. But, this time as a Team Mentor. The team having some hotcakes such as Ben Stokes, Jos Buttler, D’Arcy Short and Jofra Archer. If they planned well, then RR can win this match.

SRH & RR Key Bowlers: Bhuvneshwar Kumar and Rashid Khan are the top bowlers of Hyderabad. Jaydev Unadkat and Ben Stokes are ready to damage their opponents batting lineups as quickly.

SunRisers Hyderabad next Match: They will play at home ground again with Mumbai Indians at 8 pm on April 12, Thursday.

Rajasthan Royals next Match: Royals will face Delhi Daredevils in their first home match at 8 pm on April 11, Wednesday.